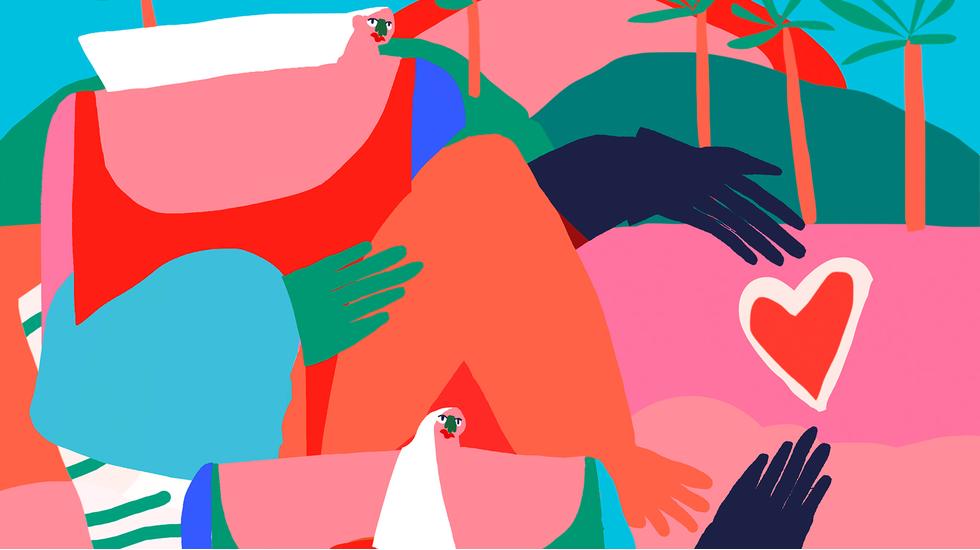 It It was 2006 and her girlfriend was performing on the ship. "I got off in Seattle and went to the famous library. It was the first time I walked into the LGBT section without worrying if anybody saw me."

A "gaycation" is often a mythologised aspect of LGBTQ+ culture. It's a coming-of-age affair or a hedonistic jaunt. Yet, identifying as lesbian or queer, I'm sceptical. Last year marked 50 years since the Stonewall Riots, and the idea of seeking liberation while taking a segregated holiday feels at odds.

Non-heterosexual travellers will have been around for as long as humans embarked on journeys, but it was only in 1973 that HE Travel, the first openly gay-only tour operator, visited the Grand Canyon. In subsequent decades, destinations such as Florida's Marlin Beach Hotel and the island of Mykonos became associated with liberal sexual attitudes - typically among men - leading to the 1983 creation of the International LGBTQ+ Travel Association (IGLTA).

Today, the LGBTQ+ market is among the fastest growing in the travel industry, valued at around $218 billion. We're more likely to have a passport than our heterosexual counterparts and, according to market research firm Community Marketing & Insights, will spend 33 per cent more on holidays. By 2030, it's estimated there will be 180 million LGBTQ+ travellers worldwide.

The market is not just expanding in numbers, but in offerings that extend beyond Canal Street and Greenwich Village. R Family Vacations caters to "non-traditional" families and lesbian travel company Olivia welcomes "sisters" who enjoy entertainment by the Indigo Girls and The L Word cast. Misterb&b orchestrates homosexual home swaps while, at Walt Disney World Resort in Orlando, Gay Days draw 150,000 people annually. With more than 200 festivals around the world, Pride is an obvious pull, but the queer travel diary is peppered with dates such as the Gay Games or Bears Week.

For Carl Hiehn of Out Adventures, such offerings can be a lifeline for the LGBTQ+ traveller. "I'm very shy," he admits. "In Cambodia last December, I joined a group trip to Barcode [Siem Reap's most popular drag bar] and popped champagne with the queens. I'd never have gone alone. It's the best New Year celebration I've ever had!"

In Cambodia last December, I joined a group trip to Barcode [Siem Reap's most popular drag bar] and popped champagne with the queens. I'd never have gone alone. It's the best New Year celebration I've ever had!

Carl Hiehn of Out Adventures

The tourism industry has much to gain from chasing the pink pot of gold at the end of the rainbow. The anacronym "DINK" - dual income, no kids - is often bandied around in relation to same-sex couples, and while it's massively flawed, it highlights that at least some of the community has economic clout. Meanwhile, legalisation of same-sex marriage - beginning with the Netherlands in 2001 - has spiked wedding-related travel among those in search of the ticket to happily ever after. For holiday company Kuoni, same-sex honeymoon bookings increased by 279 per cent between 2011 and 2016.

LGBTQ+ travellers are more than a commodity, however. A pink-washed marketing campaign and a rainbow flag on the check-in desk doesn't cut it. Some travel companies are going the extra mile to cement their allegiance by supporting local LGBTQ+ businesses and training staff to avoid awkward conversations. No thanks, we don't want twin beds. In 2012, the "Stay Hilton. Go Out." campaign included a dedicated microsite and vacation packages and gave financial backing to several LGBTQ+ events.

Such attitudes of inclusiveness and diversity are far more than lucrative branding exercises; through them, the tourism industry challenges homophobia on the world stage. For those in the global North, it's easy to view society through rainbow-tinted glasses. Heteronormativity is dwindling down a generational scale. Research by Ipsos Mori shows that 88 per cent of baby boomers identified as straight compared to 71 per cent of millennials and 66 per cent of Gen Z. Social media is giving a voice to the once unspeakable and unspoken while, at a political level, there's a trend towards less discrimination and more rights.

Sadly, you can't have a rainbow without a little rain. To paint a positive picture is to gloss over the destinations where our community is repressed. Consensual, same-sex relationships are illegal in around 70 countries and punishable by death in places including Saudi Arabia, Iran and Nigeria. There are many examples of tourists falling victim to anti-gay sentiment, too. In 2014, Brit Ray Cole was jailed in Morocco for four months for "homosexual acts"; accusations have been levelled against Egypt's police for using Grindr to entrap users; in 2019 Toto Tours received death threats after launching a 16-day LGBT trip to Ethiopia.

If places are anti-gay, should we stay away? When Brunei enacted the flogging and stoning of gay men last year, George Clooney and Ellen Degeneres called for a boycott of Sultan Hassanal Bolkiah's hotels - including LA's Beverly Hills Hotel and Paris's Le Meurice - while Virgin Australia cut ties with the state-owned Royal Brunei Airlines. Two years earlier, some US states limited government-worker travel to North Carolina after it passed a controversial "bathroom bill" requiring transgender folk to use restrooms corresponding to their sex assigned at birth.

Research conducted in 2016 by Virgin Holidays indicates that two-thirds of LGBTQ+ British adults refuse to visit places with unwelcoming attitudes towards their community. Yet of the people I speak to, few avoid destinations with anti-gay legislation. "Boycotts only serve to further isolate the LGBTQ+ people living in those destinations," says John Tanzella, IGLTA's president.

It's a sentiment shared by Dana Piccoli of Olivia Travel, who met with some of Bermuda's LGBTQ+ community in 2019, when the island's same-sex marriage legislation was in turmoil. "We took over this huge bar with Olivians and local Bermudians who were appealing the ban. It was a beautiful thing to be able to show our support. LGBTQ+ people exist everywhere, not just in places that are waving those rainbow flags to greet us. When we travel to a place where LGBTQ+ rights are in question or outright discriminated against, we are also there supporting our community."

Government laws don't always translate on the ground. In the Maldives, an edict that homosexual intercourse can earn eight years in prison or 100 lashes is largely ignored at resorts. Equally, places with progressive legislation aren't immune to homophobia. The 2019 Spartacus Gay Travel Index shows that supposedly liberal destinations - the US, Germany, Brazil - are worsening for LGBTQ+ travellers as the right wing strengthens. (By contrast, Portugal, Sweden and Canada are great.)

In 2017, four years after same-sex marriage was legalised in Brazil, the deaths of 445 members of the country's LGBTQ+ community were attributed to homophobia - a

30 per cent year-on-year spike - and a judge approved psychologists' use of gay conversion therapy. "Brazil must not become a gay tourism paradise," declared President Bolsonaro. It's in reaction to this disparate and disturbing cultural climate that app GeoSure has been developed to collate real-time LGBTQ+ safety ratings for more than 30,000 destinations worldwide.

Just as attitudes towards queer people and travellers vary, so does the community itself. We can't be stereotyped. As varied as the rainbow flag, LGBTQ+ people sit across a spectrum of generations, races, families, subcultures, tastes and interests.

"We'll let you in on a secret," say Roxanne Weijer and Maartje Hensen, the girlfriends behind travel blog Once Upon a Journey. "The LGBTQ+ community is as diverse as straight people. Of course, some gay men love to go to the beach in a Speedo and some lesbians love camping and hiking, but there are gay women who like city trips better and male couples who want to go off-grid." The "gaycation" isn't one-size-fits-all. What unites us is a desire to feel safe and welcome.

The LGBTQ+ community is as diverse as straight people. Of course, some gay men love to go to the beach in a Speedo and some lesbians love camping and hiking, but there are gay women who like city trips better and male couples who want to go off-grid.

Roxanne Weijer and Maartje Hensen, the girlfriends behind travel blog Once Upon a Journey.

Two years ago, German-Dutch couple Karl Krause and Daan Colijn, authors of A Couple of Men travel blog, joined a gay Mediterranean cruise fuelled by glittering costume parties and cocktails. "Everyone could be themselves without being judged," they say. "It's sad that the LGBTQ+ community has to isolate to be free. We want future generations to not have to identify as gay or book a gay-friendly trip."

Mark Twain wrote: "Travel is fatal to prejudice, bigotry and narrow-mindedness." As our world shrinks, the queer traveller is not just a statistic in the tourism industry, but rather a driving force in reshaping global attitudes and prejudices. Gazing into the future, I hope that a gaycation will simply be a vacation. We don't want special treatment or all-LGBTQ+ enclaves; we want inclusivity and normalisation. Love is love is love.