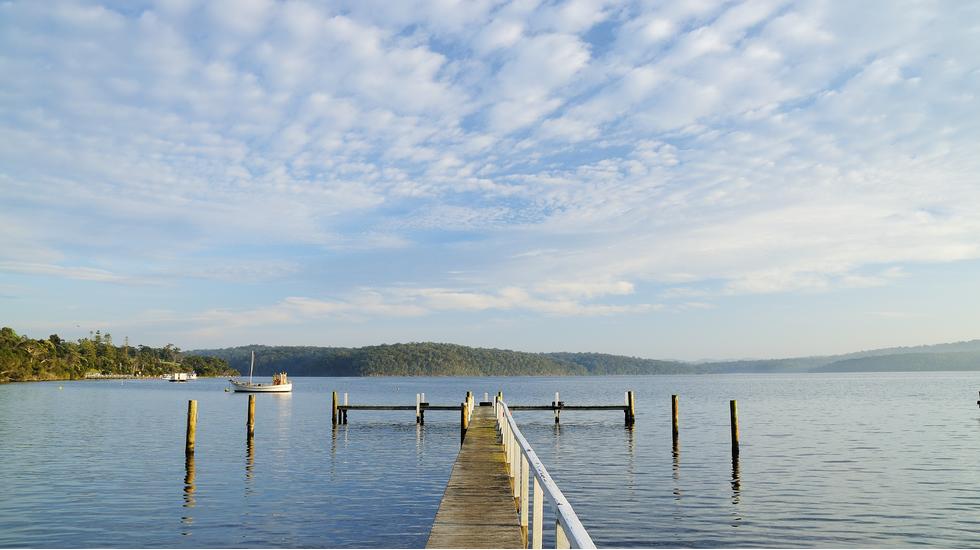 This aritcle appears in Vol. 33: Collective.

Venture Venture far enough along Victoria's rough-hewn eastern coastline and you'll eventually come across Mallacoota - a quiet, unassuming fishing inlet flanked by tumbling sand dunes and glittering shores. One of the most isolated towns in the state, the area is locally known for its laid-back surfing beaches and mirror-still lakes, but gained international attention when its blood-red skies were emblazoned across newspapers all over the world during the 2019-2020 Australian bushfire crisis.

One of the worst-hit towns in Australia, Mallacoota was largely evacuated during the blaze and lost more than 100 homes to its flames. Husband-and-wife duo Graeme and Jenny Mitchell, owners of Karbeethong Lodge - a 1920s guesthouse overlooking Mallacoota's waterfront - count themselves lucky to have escaped to a neighbouring town before the fire spread, while the lodge survived unscathed thanks to a serendipitous change in wind direction.

Three weeks after the fires, Karbeethong Lodge became a temporary home for the army as the couple returned to accommodate troops who had been drafted in for the relief effort. One year on from the crisis, Graeme tells us how the community has rallied to get back on its feet.

Why should travellers come to Mallacoota?

Our small town is surrounded by pristine wilderness: unspoiled surfing beaches, rugged hills and a beautiful tidal estuary. Travellers come here to get in touch with nature - there are spectacular coastal routes for hiking and cycling, and all sorts of watersports. My favourite place is Goanna Bay; an islet only accessible by boat. On a hot day you can spot goannas [a large lizard] up to five metres long lounging languidly in the sun.

What was it like to host the army after the bushfires?

It was a truly incredible experience. One hundred personnel from the Australian Defence Force stayed with us for two weeks. They set up an office and a medical unit at the lodge, while an engineering squad took over our garage to clean their chainsaws every night. I cannot tell you how hard these troops worked to clear up and repair the fire damage - they came back black with ash from head to toe every evening.

What initiatives have sprung up since the crisis?

The Mallacoota and District Recovery Association, our community-led recovery committee, was set up as a "thinking group" in the aftermath of the fires to collect ideas and skills for a 360-degree recovery programme. We meet every week to ensure the needs of the community are being met, and coordinate between different organisations. We wanted to hold workshops after the fires, but social-distancing restrictions meant that we had to take this all online - so we've created several fuel-management webinars and mental-health first-aid programmes, which have proved very popular.

There's also a brilliant nationwide foundation called Waves of Wellness, which runs surf-therapy sessions and promotes mental-health awareness. The programme came to Mallacoota last year and it was a great success. Up until then many people had negative memories of the beach, where they had been evacuated to during the fires - it was a wonderful, positive way to reclaim the area.

Are there any local heroes we should know about?

The Country Fire Authority was phenomenal; it runs community-based fire and emergency services - most people involved are volunteers who have full-time jobs. They showed remarkable bravery working alongside our fantastic state firefighters.

I was also amazed at how quickly the Department of Environment, Land, Water and Planning in Victoria managed to mobilise volunteers to rehome injured animals. We have a friend who is currently harbouring four orphaned wombats - she feeds them by hand and they've been sleeping in her bedroom every night!

How is Mallacoota's landscape regenerating today?

Bushfires are a part of life in Australia, so our landscape is naturally resilient. Some seeds here actually have to be burnt before they can grow. Our native wildflowers, grasses and tree ferns grow back straight away, as do our eucalyptus trees. When my wife and I returned to Mallacoota three weeks after the bushfires, we could already spot new green growth along the eucalyptus tree trunks, which shows just how quickly they bounce back - it was a very special sight.

For more information on Mallacoota visit australia.com, or discover Karbeethong Lodge at karbeethonglodge.com.au