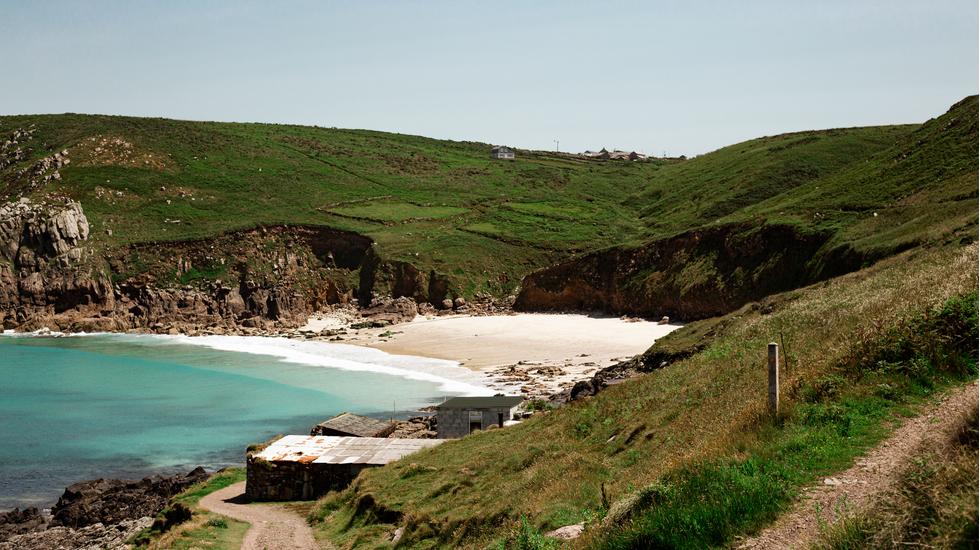 This article appears in Vol. 31: The Freedom Issue.

We We are driving. We are driving through valleys and farmland, to coves and cliff heads and points along the coastline we remember from growing up.

We are driving through West Penwith in south-west Cornwall. Though it has been years since we were last here together, some things are immediately familiar. It is overcast and outside the wind is whipping at the peninsula, throwing the car across the road. There are mud tracks from big machines and twisted patterns of green in the hedgerows that turn into barrelling waves of flora. Birds hang in the air and, in glimpses over the roving landscape, the sea stretches to impossible distances.

Joe has always taken photographs. For as long as I can remember, he has carried a camera: on winter walks, in spring blossom, at summer barbecues, and on the late autumn evenings when we'd hang our legs over the harbour wall and look at the horizon light up like the Kelvin scale. Today we are driving to take photographs of the area where we grew up. Joe lives in London now, mainly because there are more opportunities there. I got lucky finding decent work in the region, but this is rare. Today is about reclaiming a sense of place with the area.

Our route takes us first to Lamorna Cove, a magnificent rocky micro-port that opens up to an expanse of sea. In summers past, Joe would sit and rent out dinghy boats, bronzing in the auburn heat. A short drive inland and we pull the car to a halt, walking through woodland to St Loy, where giant sand-coloured pebbles stretch for miles to cliff edges, the fields where we used to shoot air guns and the RMS Mülheim wreckage between Land's End and Sennen. The sun breaks through the clouds as we reach Cape Cornwall. We listen to the music we cut our teeth to, digging deep into indie landfill - The Cribs, Young Knives, The Subways, Wild Beasts, Wu Lyf. We drive around the bending Broads through hamlets with no name and others that it hurts our tongues to curve around. We pass shopper buses and Discovery Land Rovers, a spectrum of affluence and apathetic infrastructure in a landscape rife with compulsive beauty. Finally we reach the Knavacks, which overlook the crashing waves of Godrevy Bay. Wild ponies cock their heads in the broken sunshine. They watch the surfers sit out back waiting for a set to roll in.

West Penwith is a world away from the Cornish cornerstones usually captured for postcards and fridge magnets. It is an area of Cornwall that the overexposed tourist towns typically only source fish from to sell on their à la carte menus. There is no froth

or foam to eat in the restaurants here, despite the ebbing boats teeming with crustaceans destined for The Ritz, Harrods and The Savoy. Here, the wind whistles through boat sails like it's in pain. The tears from fallen ice-cream cones soak through the surface of Rab jackets. Rusted bolts cry sanguine lines down boat bows. It is unforgiving. Every year a mammoth storm hits Penzance promenade, lifting paving slabs and twisting the iron railings. On the edge of the promenade is the famous Jubilee Pool, the setting for The XX's music video Chained. The space is newly renovated, a cool hangout by day and a playground for vagrant teens to skinny dip in by moonlight. The area is a fractal, a shifting shape whose movements are impossible to judge.

The number of places that open in Newlyn, little art galleries and stuff, they never last that long, to be honest

Growing up anywhere in Cornwall means living to an annual cycle: thriving tourism to economic scarcity. In the three months when the sun shines and many tourist-based businesses thrive to survive another year, the roads clog and services become stretched. In the winter, the rain pounds, second homes are vacant and there is nothing to do, no one to see, no money to make. At least, that's the perception.

"The number of places that open in Newlyn, little art galleries and stuff, they never last that long, to be honest," says Ben Rowse. Ben is the youngest skipper in Newlyn harbour. He skippers the Nimrod, a boat that was designed specifically to catch crab and lobster. "They think it's going to be all right for the summer and then they're gone again." Ben has been fishing since he was 18. We meet him by the Nimrod in the late afternoon, weathered from having traced the coastline. Ben is hungover after a long night in the Swordfish (or Swordy), the local pub. Uncertainties around the Covid-19 pandemic are circling in the air and for Ben, the small reserves of product he has on board must sustain the crew for the foreseeable.

The Nimrod is one of a fleet of nine crabbing boats that make up The Real Cornish Crab Company, a fishing company renowned for the quality and traceability of its offering. While quaint when passing through, Newlyn's fishing industry hinges on a culmination of advanced technologies built up through years of experience. "It's amazing, really, the kit. We have two radars, a sounder for the seabed, plotters and a machine that maps the ground surface in 3D. Our main thing is that we don't just use this equipment to find the animals. We make it so that our customers know exactly how, when and where it comes from." Ben is to the point, with a boyish charm. As he shows us around the boat, he starts to explain what the different things are - radars, sonars, various displays - before wandering off into an entirely unrelated story. When asked about the changing face of Newlyn - the independent cinema, the cheese deli, the wine bar - he gives little away. "You gotta have the Swordy, otherwise Newlyn would lose itself."

Unlike its jewel-box cousin Mousehole, which is a well-known tourist hotspot, I have always considered Newlyn an industrial thoroughfare as opposed to a destination in itself. Yet in recent times, this harbour town has seen rapid evolution. Reflecting the way an established industry such as fishing has looked to shifts in consumer trends to survive (for example, creating a traceable supply chain), the town is a litmus test for artists and independent businesses.

Emma Hunt and Rohit Patker had no attachment to the place before moving to Newlyn. Devon is where Emma grew up. Her fine-art studies in London led her to work in several well-heeled restaurants and she met her husband Rohit while working in Blueprint Café above the Design Museum in Shad Thames. Fast forward a few years and the couple run Lovetts, a coffee house by day and organic wine bar by night. "I think it was always on our radar that we wanted to open up our own place. We wouldn't have been able to do it in London, I don't think; it's too expensive," Emma tells me. "We live on a terrace in Newlyn, and we were having a glass of wine with our neighbours. They said, 'Oh, Julia is getting rid of the shop, why don't you open a wine bar there.' But we hadn't lived here for very long. Julia lived on our terrace - everyone knows everyone. Anyway, the next day we had a phone call, and it was Julia who said, 'I've heard you want the shop then.' And we just made it happen."

Lovetts specialises in high-quality products, with low-intervention wines, coffee and various delicious culinary offerings presented in a style that complements the family- run business. Opening whenever it suits Emma and Rohit's home life, Lovetts provides an experience unique to the area, where it is blatantly needed. As with fishing, wine and coffee here are steeped in a history that has been largely forgotten and fundamentally changed through mass production and consumerism.

I think hard about what exactly has been lost as I reflect on my and Joe's attempts to reconnect with the area, flicking through the images he has taken. While tourism is, fundamentally, about exploring new places, the ease and plenitude of its practice have meant that destinations have often forgotten what they are. This much we know, and the topic itself has been explored so many times it has lost its meaning. But what exists about a place like Newlyn and that seems impossible to remove is its sense of community, which in itself makes it difficult for Joe and me to fully reconnect. Not that this is a bad thing; it's just that we are tourists in a new place we also happen to call home.

Like Newlyn, Zennor means little to most visitors to the area, despite its proximity to St Ives. And for the most part, apart from an exceptional pub (The Tinners Arm) and restaurant-slash-hotel (The Gurnards Head), Zennor remains a place to pass through. Beneath its surface though, against the blueish backdrop of the Atlantic Ocean, a network of artists is reimagining the world around them.

Behind a large wooden door, through a cavernous barn, tucked in an ope way (ancient street), Louis Gulliver King makes music and theatre. He recently returned from a national tour of RAT, a theatre and live music production that tells the story of the Pied Piper of Hamelin. Louis, too, moved away for many years, but has since returned to the area. "Being a freelance musician there is not a lot of work down here, but there is certainly not enough money to be made elsewhere to live the way I want to. The pace of life here gives me the time and space to make the work I make without having to figure out how to pay the bills," he tells us.

Outside the window of his studio, the grass of the lawn is combed over with wind - a cow blinks, unmoved by the bitter cold. Louis swivels excitedly on his stool and plays Joe and me a section of a piece he is working on. It is from a new project with the working title of the Isolation Compilation, which will bring a collection of musicians together digitally as we all self-isolate. An artist will receive an audio file from which they have to add a layer before passing on to another. I ask Louis what he thinks the future holds.

"While the area has not changed for hundreds and hundreds of years, it is now changing quite significantly in lots of little ways. The main thing is second homes and holidays, and how that impacts the people who live here full-time. Mark Jenkins' film Bait comments on that brilliantly. You get people down here who are very shouty and political and often misguided - tourists make it possible for people to live here year- round. I don't know; there will be something weird that kicks off with the second homes. The coronavirus pandemic has also meant loads of people have come here and we just don't have the resources to cope with that volume of people full-time. Maybe Cornwall will reclaim itself because of it. Maybe there will be a response that creates a new kind of infrastructure to support all these people. It would be good for the arts because there will be a new audience, I suppose." He pauses. "But I don't know Ben; I just don't know."

Discover More
Falmouth, Cornwall: Why the Art Crowd are Flocking There this Summer
Read now