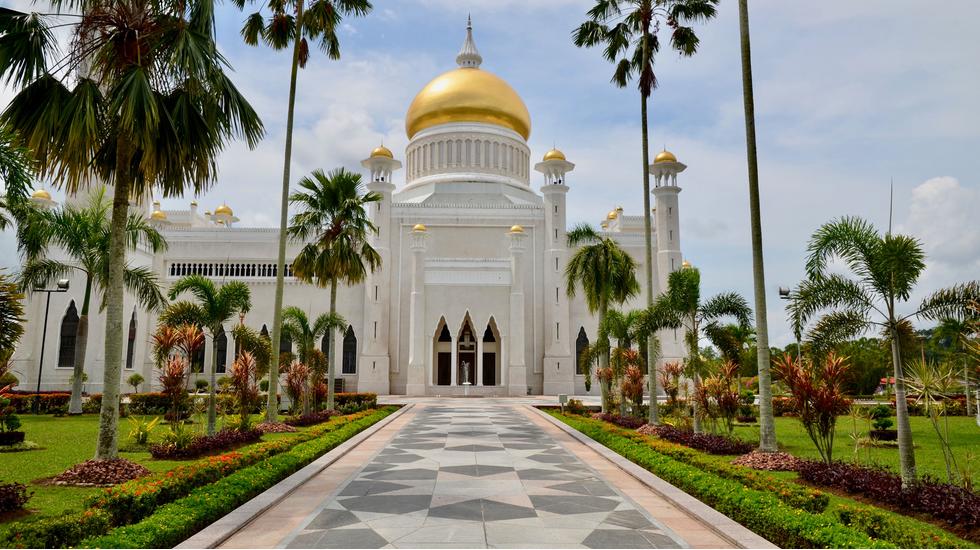 With With its quality healthcare, free education and generous tax exemptions - not to mention its idyllic landscapes - Brunei once seemed a veritable paradise. This small sultanate appeared to have it all: glitz and opulence to rival Dubai, picturesque water villages that earned it the moniker "The Venice of the East" and rainforest that put neighbouring Malaysia to shame.

Yet something controversial is happening beyond this veneer. Last week Sultan Hassanal Bolkiah introduced a new law stating that homosexuality - along with sodomy, adultery and rape offences - can now be sentenced to death by stoning. Requiring multiple witnesses or a confession for a prosecution, it is likely the law will be rarely enforced. Yet it appears the announcement may be a nail in the coffin for the Brunei's tourism industry.

Transport for London has removed all posters promoting the destination from its network while Virgin Australia and STA Travel have cut ties with Royal Brunei Airlines. Public figures including Elton John, Ellen DeGeneres and George Clooney have urged a boycott on the Sultan's hotels around the world.

The chances of the former wealthiest man in the world bowing to public and financial pressure seem almost non-existent. Reversing the law and reinflating his bank balance would be at the cost of humiliating himself in front of conservative Muslim allies with whom he shares trade partnerships.

Call me cynical, but in the event of any serious financial impact, it's likely to be the citizens' access to resources that will be withdrawn first, not royal wealth. Isn't our aim to support and empower victims of the Sultan's harsh regime rather than impoverish them?

The country has always had its fair share of eccentric rules. When I first visited in 2010, I was handed an illustrated brochure on the nuts and bolts of Bruneian etiquette, containing instructions on everything from dress code to sitting positions. Crossing legs at the ankle is acceptable; crossing them at the knee is frowned upon. Not crossing them at all is borderline sinful and an "unladylike" symbol of promiscuity.

Yet official etiquette aside, many aspects of Brunei's culture seemed at the time to be little different than that of a Western country. Women I met spoke with enthusiasm about fashion, events and music. Not all females wore headscarves, but they did carry the latest Gucci handbags. I noticed skimpy, sexualised fishnet bodystockings displayed in shop windows at the malls. It seemed as though, in spite of its long list of rules, Brunei also had a liberal, easy-going side.

The children I encountered were plucky and energetic, squealing with irrepressible delight as they played tag games together. There was nothing to suggest that they were held hostage by an oppressively controlling regime. When I met the Sultan during an annual celebration day on which his palace opened to the public, he projected nothing less than liberal conviviality - many reports that say the conservative law is an attempt to cover the Sultan's "playboy" reputation.

Now, however, Brunei is falling fast. Besides the country's crumbling reputation and its condemnation by the Western world, its finances are dwindling rapidly. Once officially the wealthiest man in the world, the Sultan now faces predictions that oil reserves could run out entirely by 2035. For a country that derives 90 per cent of its GDP from oil, this news is catastrophic.

Could it be that, in this weaker financial position, the Sultan is conforming to the strict norms of conservative Muslim countries in a bid to maintain financial allies for the future? Perhaps losing Western support appears far less consequential for Brunei than maintaining its relationships with Sharia-ruled countries.

If Westerners successfully boycott the country, Brunei's investors will all be proponents of capital punishment. By removing our financial support we drive the Sultan into the arms of death penalty advocates and thwart any chance of overturning the new law.

The government has asserted that the laws are about "prevention, not punishment", assuming that few would risk public displays of homosexuality knowing it would result in death. It misses the argument around whether it is ethical to police someone's sexual preferences - most of us will agree that it is not.

That being said, the chances of a private gay relationship being discovered are slim. Much like in the United Arab Emirates, which historically have almost never carried out the death sentence, this law is likely to exist symbolically only. While that makes it no less reprehensible, it could be argued that impoverishing the locals living there (especially already marginalised LGBTQ people) would only add insult to injury.

Passive protest, quiet condemnation and simply turning a blind eye to injustices will do little to reverse the Sultan's decision. It is likely that only innocent residents will suffer, not those in power. Removing financial support could lead to job opportunities in the tourism industry dwindling and the free education, high welfare and lenient taxation for Brunei's people coming to an end. It's not the Sultan that will be punished, but his people.

Tackling human rights violations is no easy task, but I would suggest remaining open to tourism. Brunei's people must live in a country that oppresses their freedoms regardless of whether or not you visit The Dorchester. They are not complicit in their government's policies - they are normal people like you or me. Show your support. Don't turn your back.