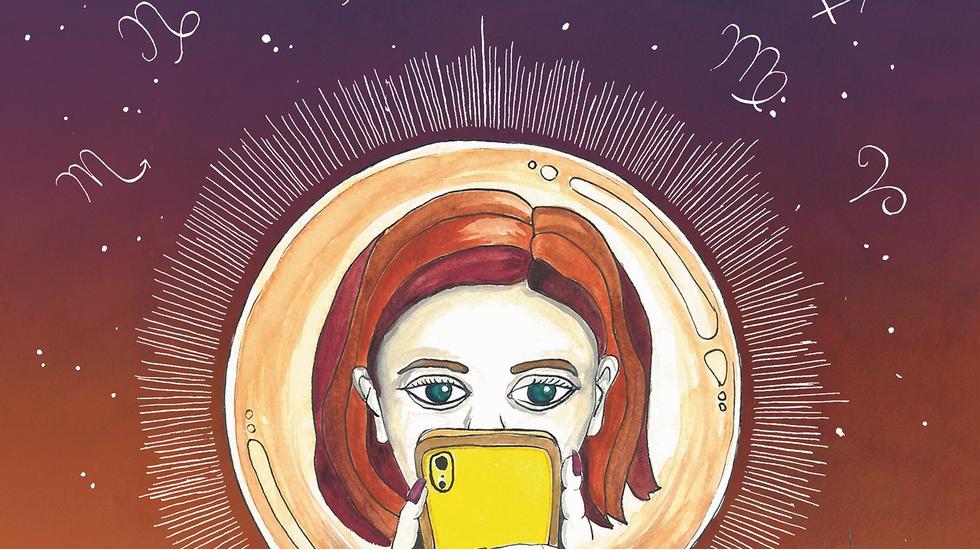 We We can't get enough of astrology. Sun signs are for sceptics and anyone with an iota of interest in their holistic wellbeing knows their moon and rising signs too. "Big Leo energy" filled our social feeds last summer, while minor disasters were attributed to Mercury's retrograde.

Of course, this isn't astrology's first 15 minutes of fame. References are found in texts created by the Babylonians around 1700 BCE. Ptolemy laid the basis for its practice in his 2nd-century work, Tetrabiblos. Astrology boomed during the Renaissance, when the newly invented printing press distributed almanacs, and it enjoyed refreshed interest in the New Age of the 1960s and 1970s.

Now astrology is evolving yet again, shifting from psychedelic pursuit to millennial canon - but instead of gazing skyward, we're using phone screens as windows into ourselves. Data-driven apps such as The Pattern, Sanctuary ("the Uber for astrological readings") and Co-Star use our natal charts to create hyper-personalised horoscopes. Instagram accounts including @notallgeminis and @trashbag_astrology boast hundreds of thousands of followers. "Astrology can be overwhelming," says Lisa Stockley, who has worked as an astrologer for 20 years. "A meme makes it digestible."

It begs the question: does modern astrology have meaning that runs deeper than mystical algorithms and marketing? Many have attributed horoscope hysteria to millennials' appetite for irony and navel-gazing. We don't want sanguine predictions; we want self-deprecating, cosmic roasting. We want memes to explain why we're never on time - "I can't help it, I'm Capricorn" - or push notifications to tell us "your nervous energy won't be useful today" or "maybe you just need a good roll in the hay".

Nevertheless, astrology's popularity can also be seen as a response to our uncertain world. In the 1930s, horoscopes gained traction in UK newspapers in the wake of a stock-market crash and King Edward VIII's abdication. A 1982 study by Graham Tyson concluded that it is mainly stressed people who consult astrologers. Today, we - the burnout generation - are experiencing environmental, economic and political doom. We want to know why.

"Places to which we have traditionally looked to for answers - organised religion, political, corporate, financial institutions - are less and less able to answer existential questions," says Ruby Warrington, founder of The Numinous and author of New-Age guidebook Material Girl, Mystical World. For her, astrology is stepping into this vacuum of belief. "The movements of the planets give us a big-picture view of what's transpiring in our lives."

She continues: "Astrology becomes a language through which we can connect with people, and discuss the parts of ourselves that we might otherwise find difficult to articulate." Astrology's collision with 21st-century technology and consumerism may not be such a bad thing after all - it has opened a channel that can lead to more meaningful engagement, a form of collective self-care.

"Time, and life, is cyclical," adds Stockley, "Astrology has been around for thousands of years and its popularity has always waxed and waned. This is just another phase in the cycle." With this in mind, she has created astral itineraries to guide your next adventure.

Active holidays suit Aries best; they need to be constantly on the move. Aries get bored easily and rarely like going to the same place twice so when they do, they have to try something new. Independent travel would suit Aries, as they prefer to take the lead rather than follow the crowd. Travelling somewhere not yet on the tourist trail would appeal to their pioneer spirit, such as trekking the Transcaucasian trail in up-and-coming Armenia, exploring the peaks of Chilean Patagonia or strolling the streets of Serbia's second city, Novi Sad.

Taureans tend to like the good things in life, so anywhere with good food and spa would suit them perfectly, such as the gourmet valleys of South Tyrol. They are lovers of nature and like to feel rooted, so they may prefer to spend longer in a single destination rather than moving around. A chance to slow down and move at their own pace is often appreciated by Taurus folk - think soaking up the café culture in Buenos Aires or the beaches of Koh Samui.

With a desire for change and a need for stimulation, Geminis are likely to enjoy sociable holidays during which they can meet people as well as explore somewhere new, like South America's best-kept secret, Guyana. They love new ideas and making connections, so may benefit from a trip in which they are immersed in the destination. Gemini people are often the kind who enjoy ticking off destinations on a must-visit list and would thrive in the sprawl of Istanbul or unexpected cultural nexus of Galway.

Cancer is the sign of home and family, so they may prefer to stick to familiar places suffused with nostalgia. Coupled with Cancerians' deep connection with the sea and tendency to feel more relaxed and happy when they are close to water, a beach break in Cornwall or the Canary Islands should tick all their boxes. Cancerians love good food and will enjoy the local cuisine - as long as it's not too unusual.

Leo is the sun worshipper of the zodiac, so a tropical holiday is likely to appeal. They have a reputation as a party animal and often enjoy being the centre of attention - they may enjoy a busy destination like the colourful cities of Bahia or Tel Aviv with a crowd of friends. Following creative passions is also important to Leo; for them, a trip which involves art or music - both making and appreciating - would be ideal, making the artistic haven of Arles an easy choice.

Lovers of calm and quiet, Virgoans can be perfectionists and will ask a lot of their holiday destination. They want a chance to relax but also to keep active, enjoy healthy food and place an emphasis on wellbeing, which means hiking in health-focused California or horse-riding in Jordan could suit them well. A certain level of familiarity is preferred, however, so they may not like to go too far off the beaten track. Virgoans tend to be detail-oriented - they are well organised travellers.

With an appreciation for peace and harmony as well as a desire to share everything with their loved ones, Librans are likely to enjoy a quiet beach destination where they can recalibrate, such as stress-free Rabat. They often have a deep appreciation for the arts and may enjoy a city break with plenty of cultural activities. They appreciate a touch of luxury and will enjoy a destination which allows them to enjoy the finer things in life, making Portland's combination of high-end cuisine and artistic heritage a must-do.

With a strong appetite for life, Scorpios will revel in the experience of exploring somewhere new, like the creative Sengal capital of Dakar or the altitudinous valleys of Peru. They tend to live intensely and will seek emotional connections and deep experiences. For them, it's better to get to the very heart of a destination and understand it well rather than spending a short amount of time in many different places - they will resist anyone who tries to rush them.

The seeker of the Zodiac, Sagittarians are almost always travellers, constantly broadening their horizons and seeking new adventures in places that offer boundless scope for them, such as New Zealand and Iceland. Sagittarian people are on a quest to find meaning, so may enjoy travelling to sacred sites around the world. Of all the signs, Sagittarius is the most likely to enjoy travel purely for its own sake. If they're not on a trip, they will be planning their next one.

As the sign of the goat, Capricorns would be well suited to a journey that involves mountain climbing, whether the frosty peaks of British Colombia or the green hillsides of Romania. Such people tend to like a challenge and are very organised, so they are likely to be fully in control of the itinerary at all times. Capricorns should either take the lead or travel independently, but never follow the crowd. They often have a love of old ruins and an interest in history.

Aquarians are the eccentrics of the Zodiac; they will be happy in any destination as long as it's unusual - the more obscure the better (Qingdao or the Frinian Islands, anyone?). They like to connect and will seek an authentic experience, so avoiding the tourist trail is likely to be a high priority. Of all the signs, Aquarius is likely to be concerned with sustainable travel and may enjoy exploring Bhutan, the only carbon-negative country in the world.