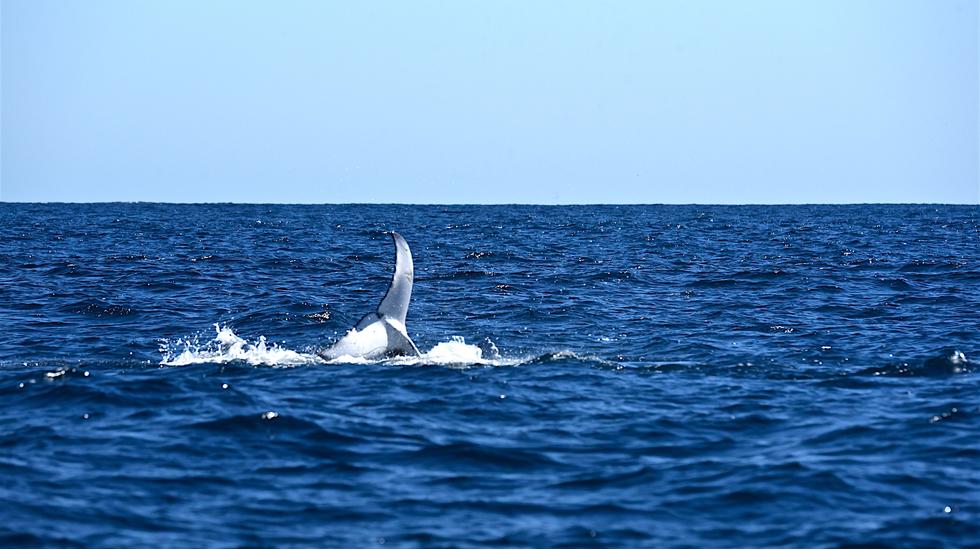 I I landed in a desert-like landscape, with sand as far as the eye could see. Like a mirage, the town of Exmouth shimmered in the heat on the horizon. I'd flown one-hour north of cosmopolitan Perth's bustling city streets to the small town of Exmouth on western Australia's northwest coast. I had come to experience some new sea-based activities on offer: swimming with humpback whales in open water and kayaking along the World Heritage-listed Ningaloo Reef that stretches 300km from Red Bluff to Bundegi Reef near Exmouth.

Ningaloo is an incredible natural aquarium and one of the longest fringing reefs in the world. As fringing reefs are found very close to the shore, it is easy to walk, swim, dive or kayak straight to them.

My accommodation was the exquisite Sal Salis Ningaloo Reef, a model ecotourism development camp with a commitment to maintaining and protecting the environment, nestled among the sand dunes of Cape Range National Park just 500 metres from the sea. Sal Salis consists of 16 eco-luxe wilderness tents dotted among the dunes; it is a hidden gem and one of Australia's best-kept secrets - though it may not be for much longer, as it's made its way onto various travel hit lists for 2017.

Groundhog Day mornings started the same way; my wake-up call was the sound of wallabies slowly thumping along the boardwalk leading to my tent as the sun's first rays touch the water, casting a reddish glow across it. I submersed myself into the sea with turtles, fish and reef sharks for company, before settling down to an exotic breakfast back at camp.

On the first day, I was on my way across choppy waters in search of humpback whales with the Live Ningaloo expedition company. This new venture operates between 1 August and 31 October, and enables guests to swim with humpback whales while accompanied by marine experts. A spotter plane circles above the boat and then radios the humpbacks' coordinates to the skipper. We floundered about with our heads in the deep, dark, open water looking for humpbacks. The rough water made visibility poor, but suddenly a high-pitched whale song vibrated through the water, getting louder as the creature approached.

The elegant whale swam beneath us. I could just about make out its shape in the murky water and, as I lifted my head out of the water, it surfaced in front of me. Its huge, barnacled body and distinguishing hump glistened in the sun as it flipped a massive tail in the air before re-submerging itself and swimming off. More whales came close to our boat, but the sea swell became too big and we were unable to enter the water again.

The following day was spent paddling kayaks along the reef just a short distance from Sal Salis. We carried snorkelling gear in the kayaks which put on before slipping into the clear water. Immediately, colourful neon damsel fish and pink anemone fish swam by, as vibrant parrot fish nibbled away at the coral. There was so much life, light and colour and thousands of fish filled my view; I felt I was swimming through a documentary film about an unspoilt, innocent reef.

We paddled to another mooring, where we swam with a green turtle for 20 minutes before it got bored and swam away. A big friendly grouper, a beautiful and harmless fish, swam past, while a well-camouflaged wobbegong shark lay on the sandy seabed.

The following day, I joined Ningaloo Whaleshark n' Dive to go scuba diving on Exmouth's Navy Pier. They also operate day snorkelling trips to see the vast and placid whale sharks, the largest of all whales, which come to Exmouth's shores between mid-March and September. The average depth of the dive was in shallow water around ten metres; often the most interesting depth to dive in. I immediately found myself among a beautiful swirling mass of bigeye trevally fish; swimming in a vortex down through the pier's barnacle-covered structure, they resembled a silvery underwater tornado.

There's no shortage of fish in Exmouth's restaurants either. I dined at the popular Whalers Restaurant - a short walk from the Ningaloo Novotel - where we devoured their Shark Bay crab, local tiger prawn cakes and Coffin Bay oysters. Other activities on offer in the area include a boat trip up Yardie Creek Gorge, where the shy, black-footed rock wallabies live, and a visit to the Mandu Mandu Gorge with its magnificent fossils. But, mostly, you'll just want to slip into the sea and immerse yourself in the underwater world.

Swimming so close to the marine life on this miraculously unspoilt reef is really special. Exmouth's waters give you a feeling for how special our oceans are - and how important it is to preserve after them.