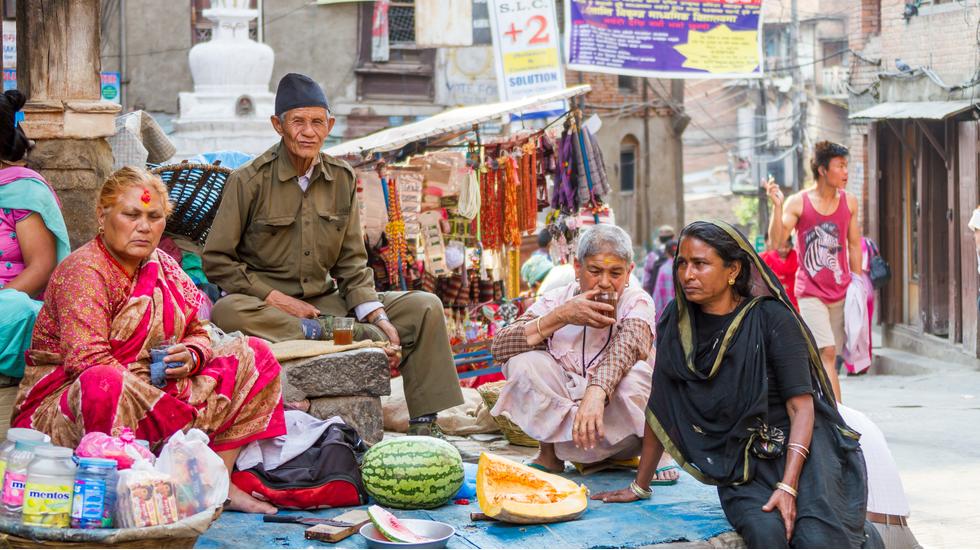 Words by
Will Brown

The The tea vendor looks at me as he ladles our chai into two tall glasses. The fuel of Nepal. His mouth is fashioned into a wry curve and his eyes are fixed. They are royal eyes - the eyes of a king - part magnanimous, part contemptuous, part expectant. They tell the truth, his eyes, for there is no attempt to hide his disapproval. They are the eyes of a mind made up, the eyes of someone who believes he knows all worth knowing and so looks no further. A look of conviction: that I am just another visitor in this city - a temporary patron - and in a week or so I will leave.

The shop is the size of a small bedroom, set into the wall of a traditional-styled building - one of the few that defied the earthquake. Wooden masks with widened eyes line the walls, encircling the hole where the vendor passes the steaming tea. They are his council; an extension of his scrutiny. He insists on his stare and I stare back, smiling. I do not feel uncomfortable because the eyes are honest. To compare his stare to the automatic light flickering in the eyes of a barista back home is like comparing a one-word answer to a question with a fumbling of hands and excuses; it is easy and straight and honest. I enjoy the tethering between our pupils because it is real - a genuine look of a contempt is better than a smile twisted by servility.

It is morning, and nothing is open except the shops selling tea. Aside from the murmurings of sellers assembling their wares on fraying rugs, Durbar Square sleeps. I am seated on the wall of a dry fountain with the hot glass pressed to my palm. A lazing dog enjoys the early sun that extends beyond the silhouette of a pagoda. I sip, slowly and consciously. There is no rush.

Ali looks out of place in Kathmandu. He is six-foot-four and two heads above the crowd. I laugh at his figure lofting through the busied streets; hands open at the base of his long arms; people parting like gazelle navigating the march of an elephant. In the Nineties, he was a rafting guide here, returning now when he can for a "walk in the big hills". I met him crossing a high pass in Sagamatha National Park (in the Everest region), whispers of techno reaching out like a handshake from the speaker strapped to his pack. He is 50 years old, Scottish, and one of the coolest people I've ever met.

It is difficult getting anywhere with him. Swathes of old Nepali friends stop us as we mooch between bakeries, corrugated shacks - where elderly women fan omelettes onto iron hot plates - and shops displaying cream-filled doughnuts on sticky, varnished shelves. "Lambu!" calls yet another voice - Tall Man -"Lambu, we've been waiting for you!" The shouts precede a small, energetic man who dives into a handshake. The two old friends converse in Nepali, maintaining an elevated intensity throughout the conversation as though his wife had just borne a child, before the man departs. The excitement in his eyes, as they dart between the two of us, stretches my mouth into a taut smile. I smile because it is a new experience - no one gets this excited seeing a friend.

The man reaches into a pocket and pulls out a block of hash. He breaks off a pebble - a few grams - and hands it to Ali before shaking our hands again and rushing off into the sea of people, his Dhaka Topi hat still visible amongthe heads like the fin of shark cutting through a surface of water. Ali smiles without surprise and fingers the hash into his trousers. "They might not have much, the Nepali's, but they have big hearts."

We're eating cake in Ali's favourite bakery. The walls are tattooed with the preachings of hippies past; their dreams of changing the world, cracked and tired like the paint. Dry sun beats through the window, conflicting with the shade and the soft bulbs inside, making the bakery feel like a cavern, an oasis - a refuge from the heat outside. The air is filled with the sweet smell of cake and cigarettes, the smell of a lost luxury: the forbidden fumes of tobacco with notes of chocolate, banana and sugary coffee. If colonialism had a smell, this is how I imagine it.

"This was the place to be, Snowman Café," Ali tells me. He talks of times before the Civil War, where people came here instead of Thamel: an array of restaurants and expensive eats, a few bars and a crowd of booking offices; avenues of prayer flags and cheap fabrics; Kukri knives and incense. Thamel is the new tourist centre of Kathmandu. People normally spend a few days there before trekking to Everest Base Camp, or heading West to Pokhara and the Annapurna range. Because of the war, the travellers left Freak Street - they left Nepal - leaving behind the inscriptions on the walls and a vast library of cassettes; entombed now behind the glass of the counter, left, not to entertain, but as a reminder of what was.

"The crowds have definitely changed in here," laughs Ali. The occupants are younger, he tells me, and now predominantly Nepali: schoolchildren meeting with friends, couples sharing a slice of something on a disposable plate; a congregation of mini-speakers contesting for the air. A few interspersed tourists from the last generation of travel - people like Ali - sit alone. No longer really travelling, but revisiting; journeying to the places where they not only discovered the world, but themselves. Sitting now, years, decades, later; the same tables, the same cassettes, the same cake; enjoyed by friends of a past life, of lovers forgotten about and forgiven; the echoes of conversations: honest, exciting and optimistic - all that could have been. They are not travelling. They are reacquainting with their souls.

"The locals have kind of reclaimed it…" Ali muses, "which is nice, actually - keeps our man busy." He gestures to the man fluttering between the tables with cake and coffee: Raju - successor of his father, Ram, the man who opened the bakery and whose mother is head chef - indeed, the only chef - churning out cakes faster than they can be consumed. I imagine her a fantastical lady: tireless and particular; communicating through meticulous fingers; through kneaded dough, featherings of sugar and orchestrations of nuts, the attentiveness, the care and the love of a grandmother.

"The tea used to come through a hole in the ceiling," Ali continues, "but they've remodelled a bit. The coffee machine is new, and the music has died. The hazes of hashish smoke have dissipated, and the floor has grown more cracks. "But it is still fricking Snowman!" concludes my companion excitedly, fanning hands facing upwards from his cheekbones to the table top, as if displaying the conclusion of argument in the lines of his hands. Anywhere else would have seen the walls repainted, the tables stripped and refitted, and the dormant tapes removed.

Despite the suffocating density and absent amenities, the Nepalis cohabitate with humbling ease. After the 2015 Gurkha Earthquake, thousands lived for weeks on the streets of Kathmandu. Durbar Square, now an enclosure of scaffolding propped up by international aid - the expanse of sandstone floor where I enjoy my morning tea - became a permanent residence, where people lived among the rubble and the remnants of their history with little relief. Following the disaster, the National Reconstruction Authority failed to devise relocation plans for the misplaced until July 2016 - over a year later.

It is only through their connection to each other, their love, their hearts, that you begin to see how these people could endure such suffering. I see it in the honesty of a tea vendor; the generosity of a hurried man; the acceptance and respect given to the graffiti - the history - left by travellers never to return. It is not eastern mysticism, the placidity of poverty, or the colour of culture. It is heart.