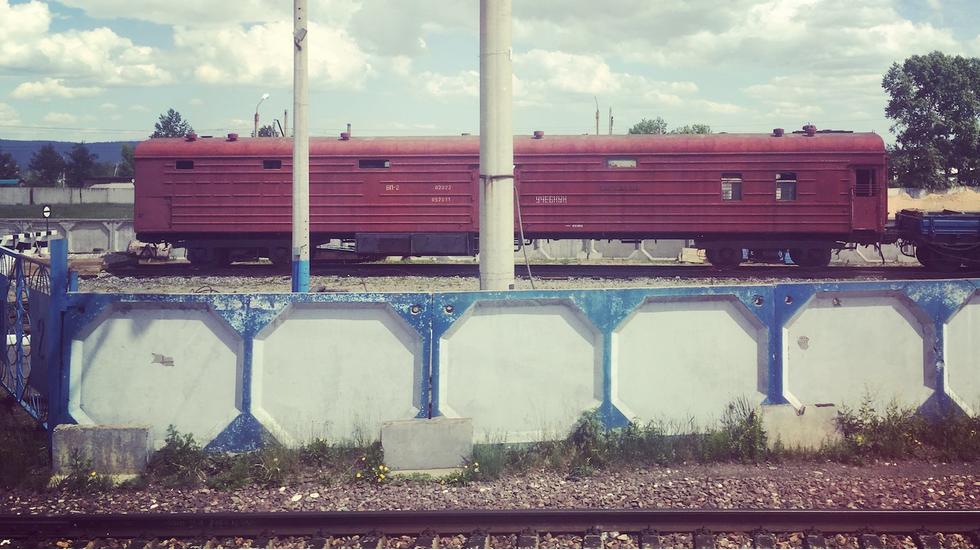 All I can do on the long journey from Moscow to Vladivostok is wait. I can look out of the window at the alpine landscape dotted with shambles of Soviet military history, too heavy and expensive to remove - or too traumatic perhaps. I make intangible plans, read all my books, drink all the vodka, plot maps of future journeys or unnamed constellations, debate the malfunctions of democracy, ask every Russian who speaks English about the moon landings, memorise my name in Cyrillic, daydream, write…

On occasion, I step out for a few minutes in stations in the middle of nowhere to watch scenes on the platform. I immerse myself in the world of the train and try to gossip with the attendant about the ladies in the dining car. I'm searching for ritual, for habit, for some sort of progression so that I have purpose. Then I wait some more.

To occupy myself, I begin to parse out what waiting really means. The idea of waiting is inherent with anticipation, of some future. But waiting on the Trans-Siberian is a conducted meditation in the present. Here I am, crossing five time zones in three days, waiting without future as I pass the past. Memories of people and phases inject the landscape with a kind of magic realism otherwise found in novels vast and far away. I begin to miss the city and society, though I do not wish for them to be near. I miss them the way I like looking out at the cold from the window of a train; mesmerised by the melancholy it elicits, but without wishing to be outside in its calm, brutal persistence.

Outside, the city dwellers' datchas (cottages) are equipped with greenhouses, a space where all life is held in control. Regulated warmth, moisture never dampening into dew, light going green without crystallising in the cold. In the transparent dome of the greenhouse, beneath the muffled, leaking sky, seasons are suspended; lettuce sprouts even in November, day in and day out. In my reverie, they appear like spaceships, both fantastical and resilient.

Waiting becomes present, productive, inefficient, losing the focus of the future and existing in the seamless reality of abstraction. Every morning I wake up and I have gained words but lost hours; I grow twice as old even as I move twice as fast. I am caught in the strange mathematics of time travel and the ambition to tease the earth's rotation into stasis, and when I look out of the window again, the sun has long set.

The end destination - it could be Vladivostok, or sooner, Irkutsk - is no closer at all.

French philosopher Roland Barthes described the experience of love as one that dilates or contracts time. "I am waiting, therefore I am in love"

On the Trans-Siberian railway, waiting is atemporal. Waiting is a vast field; "In their ubiquity and in their endless difference, fields are places of continuity and security and also of risk and transformation."

Timetables mark days: at every turn of routine, there's a stop where station life seems to play itself out as a tableau: the provodnitsas in their grey suits, mostly women because the job is so terribly underpaid, a red scarf round their necks manning the entry to the train. A very blond family with glossy leopard-printed suitcases, bulldogs, a soldier from Syria on vacation.

A burst of neon amusements: Ferris Wheels lunging out of circularity; a pretty blond girl in a blue mini skirt and a red apron at an ice cream truck; a little boy holding his mother's hand in one and a balloon in the other.

I'm far away and the train sometimes gives me the illusion that I'm moving closer, but the language barrier and distance increase. It's not the waiting itself, but the distance.

This is the feeling of human-ness, what separates us from the rest of the cosmos. A profound contact with the form and origin of consciousness even without that form and origin revealing itself to us.

Irkutsk is the home of the radical Decembrists who were exiled to Siberia. Outside, it's a strawberry moon and the cotton trees have burst, with frays of white carrying the wind in the enthusiasm of summer light. Someone in an apartment with a neon-red sign and plastic plants on the window sill belts out Tchaikovsky. For a moment, I am a duchess with a large nose in an aristocratic salon in the 19th century. I tremor in my reverie, slipping into a chasm between the brocades of a living room and the thousands of gulags who died building these tunnels.

4,887 miles and four nights later, I'm disembarking. I can feel the the chug chugging, the sway, the collection of kilometres.

I imagine the train barmaid's alternative life: she would have lived in St Petersburg in a small apartment where perverse charm lay in the ceiling cracks and peeling paint. It would be on the corner of a crossroad where, even though she uses Uber to get around town, she can hear the clip-clop of horse hooves shimmying the elite from one theatre to another.

Her greatest aspiration was to move as far as Moscow, a city where she has no ties, where she could be lost in the moment; total anonymity. This is the city of her future. A city which dabs itself in thin ice-cream tones to conceal more brutal browns.

We're lost in the sway of the great lake.

The soul is a physicist, examining the heat and speed of particles in one moment in time and studying their effect on some other particles far, far away and then replicating with differentiation, entangled.

I suppose a soul is not a where or what or how, it is a preposition, a transitive verb in motion and describing a path between, across, over, under, away. This is how the journey feels.

Here, I meet Sergei, the priest of the only standing Old Believers church. But mostly, he is a collector. In his museum of everything are pre-Soviet tools, sewing machines and rhino skulls, televisions and record players and weights and balances, patchwork bed covers, mink, coins, gold-laden scriptures, guns, knives, untuned pianos, shamanistic masks and miniature violins.

When a collector collects objects, is it their time that they collect too?

I continue to Lake Baikal, home to Russia's shamans who experience time in nonlinear ways, believing themselves to be mediums between the past, present, future and all the unnamed moments in between. The breathtaking beauty of Baikal freezes the picture for a moment. Time slips along the rail tracks, sluggish and murky, pollinated by history. Everything is rusty, oxidised. There are abandoned military vehicles with chains for wheels, lighthouses with barbed-wire spires and broken boats with irreplaceable parts. Beauty in ruin; everything is in transit. At the edge of the rails, where the mirages rise up like in the movies, a woman in a bee hat or a space helmet, emerges from a greenhouse, like an astronaut.

She has lived in Moscow her whole life and is so glad to have left the resistance of that city. She has waited a long time for this moment. She sits down to eat her lettuce.