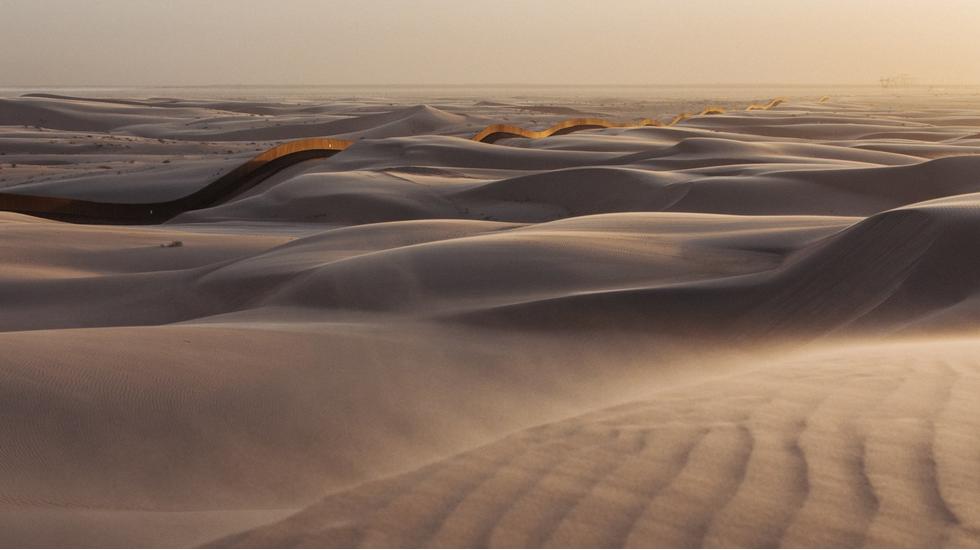 Travelling for 12 weeks and 2,000 miles along the US-Mexico border unveils a diverse vision of America, in which the kindness of strangers overrides barriers of language and culture.

This article appears in Volume 20: The Homelands Issue

A minivan with Nova Scotia number plates and "Winter Texan" bumper stickers pulled up beside us, unloading passengers and beach chairs. Beyond them was just burgeoning brown surf, blue sky and shapeless clouds, all slightly different colours of Texan haze. Boca Chica Beach is where the United States ends and Mexico begins, or where the Atlantic Ocean ends and the American continent begins, depending on which way you're travelling. Here the Rio Grande River - the international boundary between the two countries - meets the gulf. "Watch out for the bad hombres," a surfcaster joked as we passed him on our way down the empty beach to the river mouth. Getting closer we were greeted by the faint reverberations of banda music and the smell of grilling fish. "Gringo! Gringo!" a pair of teenagers on the Mexican side cried out across the water. That's fair, I acknowledged, reapplying my SPF 85. At our journey's beginning it was still winter and we hadn't been prepared for South Texas to be so tropical. The palm trees, citrus elds, taco stands and RV parks felt surreal. As one border patrol agent eloquently described the Rio Grande Valley: "It's like Florida threw up a little on Texas."

For my partner, Elliot, and I this delta was the beginning of a three- month-long journey. From here we were setting out to explore the entire 2,000-mile US-Mexico border, from Brownsville in Texas to San Diego, California, at a time when President Trump's plan to build a wall along the southern border loomed large in political discourse. Beyond talk of a wall, we wanted to understand the larger, less coherent story of our borderlands. Few US citizens, including us at that time, knew much about the communities that live along the frontier - their cultural reality, their compass of life. As with so many other matters American, the media's illustration of "the border" seemed to lurch between the sensational and the vague. We wanted a vision of the borderlands that was real, detailed and tangible. We wanted to know if the nation's heart and founding principles could be found at its periphery. We had to go there ourselves.

Over the course of several weeks we made our way towards El Paso, spending time in Brownsville, Roma, Laredo, Eagle Pass and Del Rio - all once-elegant 19th-century trading towns at the northern frontier of the Spanish empire - that still reflect a slightly fossilised and neglected colonial charm. Central plazas and high-walled gated compounds now stand empty and crumbling, their wrought-iron balconies warped and brittle. In these small towns we found tight-knit Hispanic communities where the translations between "American," "Mexican" and "Mexican-American" culture - architecturally, economically and linguistically - were extremely fluid. The border, we found, is more porous than commonly imagined - thousands of people live a bi-national existence, crossing over the Rio daily for work, for school or for lunch. "You're a minority here," I was repeatedly told by locals eager to address the culture shock that visitors from other parts of the country sometimes experience. According to the 2010 census, the demographic profile of the Rio Grande Valley is 91 per cent Hispanic and Latino. As such, it is not uncommon to find yourself at a distinct disadvantage in everyday exchanges at shops, restaurants and petrol stations if you don't speak Spanish. The Texan scholar and poet Gloria E. Anzaldúa famously claimed "Chicano Texas Spanish" as her first language, listing the other frontera (border) languages and dialects that she speaks as Standard English, Spanglish, Pachuco and Tex-Mex.

As we got deeper into far-west Texas the complexion of the land changed. Towns got further apart, stands of mesquite and salt cedar gave way to yucca, pine and creosote. After hundreds of miles of unmitigated at we were suddenly confronted with topography - craggy canyons, spires and giant rocks. From inside Big Bend National Park we crossed the border to visit the tiny hamlet of Boquillas del Carmen in Coahuila, Mexico. To get there from the US you can either wade through the chest- deep Rio Grande or pay $5 for a round-trip ride in a rowing boat. Across the sparkling turquoise river donkeys lazed in the meagre shade of scrubby cedars and thatched awnings, waiting to take us a quarter-mile uphill to a dusty one-road town at the base of towering sierras. We were courted by Estabán, an elderly gentleman sporting a toothy smile and a baseball cap with "No Wall" written in blue felt-tip pen. He handed us a binder with tattered printouts of tourist attractions that he could escort us to - an old mine, or a natural hot springs. We politely declined and he left, still smiling.

When the US abruptly shut its borders in 2002, Boquillas was effectively stranded on the other side. Located more than a five-hour drive away from the closest grocery store in Mexico and unable to access vital supplies across the river in the US, the village dwindled to only 14 struggling families. The population and tourist trade has picked up since the port of entry reopened in 2013, but in general the old US habit of crossing the border to shop and carouse is still on pause. Like most Mexican border towns, the historic bars and restaurants sit empty, waiting for tourists to return. Bottles of mezcal and painted ceramics stand unsold in souvenir shops, gathering dust. Yet somehow, amidst limestone canyons and the bleached beauty of the Chihuahuan desert, the community survives by pooling resources such as petrol, vehicles, food and livestock.

Being so geographically distant from Mexico City and Washington DC, border towns have their own strong sense of community and self-reliance, as well as a distance from the dominant cultures of either country. We found strong expressions of this in the old mining and waterstop towns such as Terlingua, Texas and Bisbee in Arizona. The latter, for example - once the biggest copper-mining town in the world - is now a small liberal enclave tucked into the Mule Mountains where artists and hippies have been cultivating a tight, free-spirited community since mining operations ceased in the 1975. Today Bisbee's extraordinarily well-preserved early 20th-century downtown still looks very much like it did back when General "Black Jack" Pershing hunted the Mexican revolutionary Pancho Villa here in the early 1900s, back when it was the largest city between St Louis and San Francisco. "This is a very diverse town," a local artist told us over beers at St Elmo bar (est. 1902). "We have gay people, straight people, artists, alcoholics, Mexicans, bikers, cartels, hippies and very wealthy people. The golden rule is not to tell anyone else how to think."

We started to identify a particular "type" who tended to seek out these peripheral places. Die-hard hippies and ageing new-ageists who began searching for a more authentic, forgiving America after the Vietnam War - or the later mall-ification of the nation - found something in these remote and often desolate outposts. They encountered communities underwritten by the confluence of several different codes of morality - the family-oriented warmth of Hispanic culture, the inter-reliance and kinship of desert-dwellers as well as the resilience and isolation-prone nature of cowboys, farmers and ranchers. Underneath it all was a rm belief in diversity and tolerance. We met people who had left New York, LA, Vietnam, Mexico and Iowa to live out their dreams in this bubble of small-town, cosmopolitan Americana. The promise of the United States here seemed to be very much alive and well.

By then, more than two months into the trip, we were used to sleeping in the open by the border, pushing all the stories we knew of what can happen there to the back of our rational minds. We slept deeply under the darkest skies, out of mobile phone range and often beyond the reach of the border patrols. We witnessed flares launched from the ranges above us - a communication system used by smugglers - and saw the footprints and the discarded water bottles of crossers. We gave a 15-year-old boy food and water when we were the first people to encounter him in the US after his difficult solo journey from Tegucigalpa, Honduras. He was looking for the border patrol agents. In recent years the majority of people crossing the border illegally are asylum seekers and political refugees whose intent is not to evade detection, but to present themselves to authorities when they reach US soil. Typically these are people fleeing some of the most violent countries in the world outside a war zone - Honduras, Guatemala and El Salvador.

Finally, nearing the Pacific, the light and the colours began to change. On the other side of the Otay Mountains the cool oceanic air touched everything. After months in the desert and heat, it felt like we could bathe in the negative ions that suddenly filled the atmosphere. By the time we reached Border Field State Park in California the last slanting light was glittering on the horizon. Here the border fence plunges into the Pacific Ocean a few miles south of the gritty municipality of Imperial Beach. A town of surfers, immigrants and the children and grandchildren of immigrants, IB (as the locals call it) is a world apart from the ritzier San Diego suburbs such as La Jolla and Rancho Santa Fe. Like Boca Chica Beach back in Texas, the only indication of life was an indistinct murmur of voices and music through the fence in Tijuana. The wall dividing the two countries here is covered with a thick, dense steel mesh that is difficult to see through. Those who come to International Friendship Park, where for generations people from both nations have gathered to visit with loved ones "across the line", can barely touch the tips of their fingers through the openings in the wire - but they still come every weekend. They visit family and friends, they talk, they pray, go home in the evening and continue their lives, deeply shaped by the border.

Vicente Rendon had brought his two children down from LA to see their grandmother that day. For them it would be the first time that they would meet their Mexican abuela. For Vicente it was the first time that he had seen his mother in 22 years - ever since he left their small village in Michoacán when he was a young man. Without a work permit or papers all these years he never felt safe to come to the park, where border patrol keeps a wary eye on all those who get close to the fence. "I still have the smell of her after all these years," he told us holding back tears. "She was young. Her hands now...back then they weren't so wrinkly."

Leaving the border after hugging it for 12 weeks, we were still confused and humbled by the terrain and the complex social landscape of the borderlands. The intricacies of a land shaped by forces of acculturation, community, diversity and surveillance had unfolded town by town, detail by detail. We found a vision of America that swung between pessimistic and patriotic, cynical and idealistic, gracious and reclusive. In many ways a crucible, the contemporary political climate offered us a stark context for confronting cultural difference within the United States. We met some of the kindest people, and some of the most hostile. There were the landowners who liked to say hello with their gun - "how would you like to get shot today?" was how one short, fierce Arizona rancher had greeted us - but they were the minority. Countless families opened their homes and their hearts to us. We were repeatedly assured, and it was constantly proved to us, that the borderlands are a place where you can rely on the kindness of strangers.