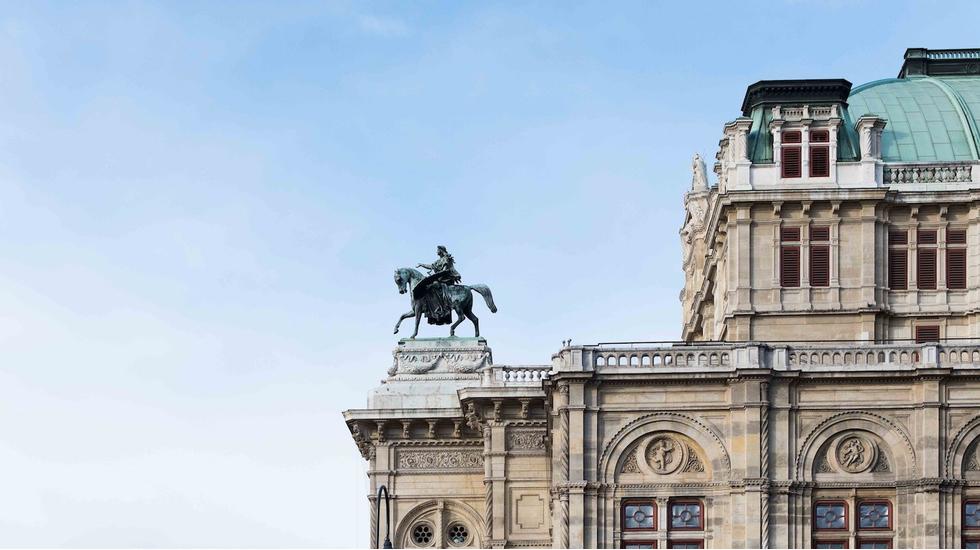 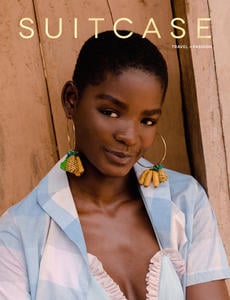 It It is Saturday evening at Musikverein, a coral-tinted concert hall in Vienna's first district. The sweeping main room, famed for its perfect acoustics, is dipped in gold - with everything from the intricately carved wall panels to the columns depicting ancient female figures gilded and glowing. Two statues recline above the grand organ pipes, clutching lyres and looking down at the orchestra, where the musicians sit in perfect formation, separated from the audience by a line of velvety red roses.

A round of applause follows a gentle cello solo before the conductor welcomes the evening's star. Valentina Naforniță is one of the most celebrated opera singers on earth. She floats on to the stage wearing a white silk dress, her dark hair pulled back with two glimmering clusters of pearls at her ears. She bows to the audience and the room falls silent. The conductor, who wears tails and has the posture of a ballet dancer, spins around to the orchestra and, with a tap of his stick and a surge of violins, the next song begins. It is a rendition of Cavalleria Rusticana by the Italian composer Pietro Mascagni.

Naforniță's voice falls and climbs with every bar of the song, stretching across the hall. The piece ends with a long high note, like an open sky, and the orchestra speeds up. The bows swing back and forth across the glossy faces of each string instrument, while the brass of the trumpets and the trombones catches the light of the chandeliers that swing overhead, dripping with luminous cut glass.

When it all ends the audience erupts into applause as the orchestra bows. I glance around at the spectators. There are elderly couples in suits and silks. Groups of young families with children perched on the cashmere-draped laps of their mothers. There are students in baseball caps and band T-shirts leaning against the back walls. It seems for a moment to be the perfect snapshot of Vienna - a city built on majesty and high art, which is as relevant today as it has ever been.

To visit Vienna is to walk in the footsteps of some of the greatest artists, musicians and thinkers of all time. Wandering down the wide boulevards and cobbled streets of the city centre one afternoon, I passed the former home of Johann Strauss, the site where he dreamed up the famous Blue Danube waltz, inspired by the glistening river that meanders through the city. Not far away is the apartment where Mozart lived and composed in the shadow of St Stephen's Cathedral. I stood on the scratched wooden floors that once belonged to Beethoven in a house overlooking the grand Ringstrasse, where he wrote the haunting Für Elise. The remains of Secessionism - an art movement started by a group of renegade artists, architects and writers - are still visible across the city. From the floral tiles of Otto Wagner's art nouveau apartment blocks, to the crowds that form to catch a glimpse of Gustav Klimt's The Kiss.

The Viennese coffee house has long been an institution for creatives and intellectuals. There are certain elements that contribute to their unique charm - mahogany coat stands, cane newspaper holders, dim lighting, waiters in waistcoats, broken wall clocks. Most of these cafés remain exactly as they were when some of Vienna's greatest minds were drinking at them - the twisted artist Egon Schiele, the godfather of psychoanalysis Sigmund Freud or the expressionist composer Arnold Schoenberg.

An imperial past is the backdrop to the changing face of Vienna, a polished city of old palaces and new ideas. Otto Wagner's famous Karlsplatz metro station is also a bustling bar. A clutch of renowned international architects recently completed the new campus of the University of Economics, where spaceship-like buildings built using local wood, reclaimed materials and mirrors to reflect the skies stand against the skyline of the Prater public park. Same-sex couples change from red to green at road crossings, a mark of Vienna's progressive nature. Contemporary artists take inspiration from the masterpieces that hang in baroque museums, while fashion designers learn their craft from artisans.

Vienna's reputation as the city of music holds truer than ever. On warm evenings locals fill the street outside the State Opera to watch shows for free on a screen hooked to its 18th-century façade. "Music is rooted in our culture," says Ilan Molcho, the young co-owner of the Israeli restaurant NENI. "Every few months you'll go to a classical concert to check out a new, young composer." After picking up Turkish flatbreads and spices at the Naschmarkt one afternoon we head to the bohemian seventh district. Sophie Pollak is the owner of Korean/Scandinavian clothing store We Bandits, and she pours us a glass of Viennese herbal liquor as she scribbles down her favourite shops in the area. "There are more and more young people bringing in new ideas for fashion, food and music," she tells us. "It feels like it's all happening here. Vienna is a blank page, and you can decide what to draw on it."

After the applause finally drops, we file down the marble stairs of Musikverein and out onto the softly lit street. We lace through the quiet streets of the first district to Adolf Loos's iconic American Bar. Students, artists, suited-up opera goers and old regulars rub shoulders in this tiny bar, where cigarette smoke curls up towards the mirrored ceiling. We knock back mint juleps into the night as scratchy jazz plays overhead. It seems that little has changed here since it was completed in 1908. The Viennese know a good thing when they see it. All that is classical and beautiful lives on in this ever-evolving city, a perfect harmony of old and new, nostalgic and forward-thinking, modern and majestic.

The glossy black horse (yes he’s real) and candle-lit chandelier that greets visitors in the hallway set the tone for this luxurious, inviting hotel, which is found in a 1950s building in the heart of Vienna on the grand Schubertring. It has the opulence of the city’s fine historic hotels with its brassy finishes, white-jacketed bellboys and meticulous service. But a youthful edge makes it appealing to a broad range of guests. The rooms are marked by bullet-grey walls, walk-in showers, rolltop baths and touches of marble and leather. The restaurant on the top floor is wrapped in glass, so you can enjoy the dizzying breakfast spread or a gourmet dinner looking out over the milky rooftops, domes and chimneys of the city. There is a little courtyard of flowers, ivy and statues, and when the sun shines, the steaming rooftop pool and sun loungers will keep you busy until dinnertime.

This laid-back, colourful hotel was once accommodation for students. Although it has been given the once-over by some savvy designers, the same comfortable, energetic atmosphere remains. The industrial-style reception and lounge area is complete with supple sofas, stacks of magazines, retro game machines and a Photo Booth. On sunny days their New York-inspired restaurant opens out onto the manicured lawns of Weghuberpark, serving Italian fare, aperitifs and cocktails. The rooms are individually styled, with eye-catching wallpaper and accessories paying homage to Vienna’s history as a circus city. Many suites feature roll-top baths (some outside on the balcony) and panoramic views of the park, while all guests have access to the sauna, gym, regular yoga sessions, free bikes and even the keys to a Mini, which can be taken for a spin free of charge for up to 24 hours.

Widely regarded as one of the world’s finest hotels, Sacher has played host to royalty, presidents and Hollywood icons since Eduard Sacher, the son of the creator of the Original Sacher-Torte, Franz Sacher, first opened its doors in 1876. Elizabeth Taylor, JFK and the Queen are just a few former guests. Much like the famous Original Sacher-Torte (a chocolate cake made with apricot jam and served with cream), this stalwart of the Viennese landscape is decadent, glossy and iconic. From the porters in crimson and the golden chandeliers of the reading room to the draped silk beds and the sumptuous royal blues of the bar, it exudes old-world luxury. The boutique spa – the only one in Vienna – offers treatments including a body wrap, face mask and a massage using their signature Time to Chocolate cocoa products. This can be followed by dinner in the emerald, velvet-lined dining room, which is watched over by gilded oil paintings of Vienna’s historic elite.

A shimmering tower of glass, this hotel’s distinctive facade makes it impossible to miss. Inside, things remain equally contemporary, with a collection of conceptual design pieces that includes a video mural by the multimedia artist Pipilotti Rist. Admire horticulturist Patrick Blanc’s colossal vertical plant wall while you check in. For dinner or drinks, Das LOFT restaurant and bar are a must.

Hotel Altstadt revolves around the Germanic notion of gemütlichkeit – a feeling of warmth friendliness and good cheer. Taking cue from Vienna’s creative seventh district, prominent designers and architects decorated the hotel’s 45 rooms. Step inside and likely enjoy the gallery-worthy art collection here; the resident art manager will take you on a tour. Indulge in the delicious breakfast (pancakes and prosecco, please) and be primed to explore the city by foot – the Museumsquartier, Rathaus and Mariahilferstraße are within a 10-minute walk.

Sir Terence Conran turned his hand to designing The Guesthouse. The result: stylish rooms with an at-home vibe and a functional focus. In-room bars are feature complementary Austrian wines and espresso machines, as well as beer and non-alcoholic drinks. What’s more, the Brasserie & Bakery serves up the best breakfast in the city from 6:30am to 11pm. Even if you are not a hotel guest, starting the day here is a must.