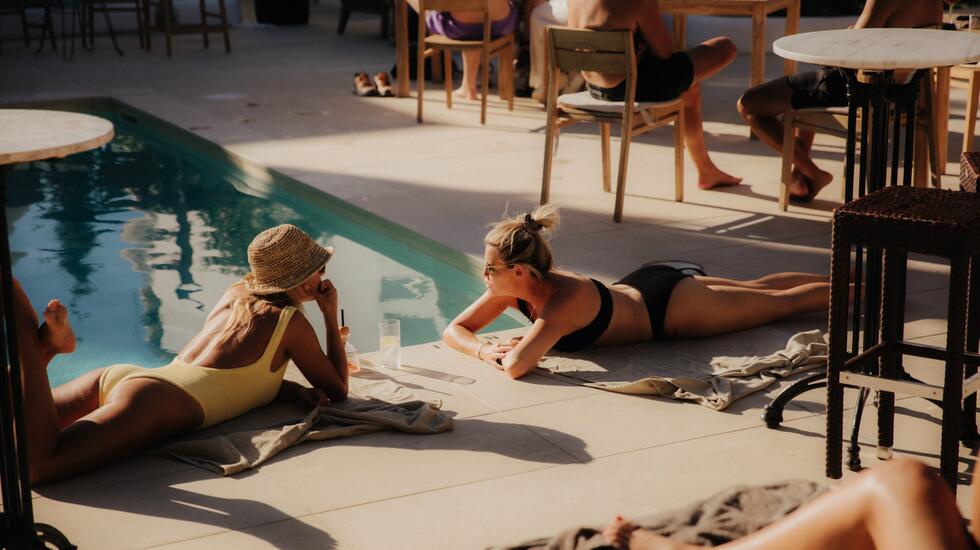 It's It's not just the cost of living crisis we have to worry about - the cost of sliving has never been higher.

Never heard the word? For the uninitiated, "sliving" is a term coined in 2019 by business mogul and one-time resident DJ at Ibiza's Amnesia nightclub Paris Hilton; it's "slaying mixed with living", to quote the queen herself. You'd use it to say you're living your best life. I'm talking well-deserved holidays, hard-earned bottles of premium spirits, raucous nights out in world-class nightclubs and exquisite meals, paid for with the simple tap of a card with not so much as a backwards glance. But with the price of life's bare necessities on a steep incline, we're all being forced to think outside the box when it comes to how we might most cost-efficiently "slive" in 2022 and beyond.

It's why I recently started to reconsider the notion of the so-called package holiday. These days, the term doesn't conjure the most… chic of images. Beige dinners courtesy of an all-inclusive deal, a block of over 100 uniformed terracotta apartments to let, a pamphlet listing reduced-price tickets to theme parks and swimming-with-dolphins experiences all immediately spring to mind. Not chic. But what if I told you I'd discovered a new, updated twist on the package holiday, tailor-made for the culture-loving, party-going modern traveller?

Eclectic conversations happen both in sessions, left, and by the pool.

Step in, the Beat Hotel, a holiday promising a distinctly different sort of "package" that's a far cry from the hellscape of bus trips and pool Pilates. This self-described "roaming event" first found its feet at Glastonbury Festival over a decade ago. Since then, the concept has travelled to various locations across the globe. This year, it landed for a week-long, cross-island experience in Ibiza.

OK, so admittedly it's not quite the whole package. You have to sort your own flights (boo) and there is no literal bricks-and-mortar "hotel" in which to seek overnight shelter (instead, Beat has relationships with island stays, offering bookings at reduced rates), but hear me out. This is a holiday that requires almost no forward-thinking; the kind folk behind it have carefully curated a bespoke itinerary bursting with all the best of island life, amalgamating classic Balearic club extravaganzas with a schedule of wonderfully wacky speaker events and tranquil wellness experiences. It's a build-your-own-bear proposal; tickets are available to purchase either per session or as day passes, meaning you needn't commit to events that seem less to your taste (although I'd say take an open mind - my favourite experiences were had at sessions I ordinarily wouldn't have looked twice at on the schedule of an English festival).

Touching down on the White Isle in late-September of this year, ready for a multisensory immersion in Ibiza life, my seven-day itinerary was already well populated. By day, I found myself joining psychedelic sound meditation sessions (dutifully guided by Valentina Olper, a psychotherapist and sound healer there to help us explore the depths of our own mind) and getting involved in a discussion on the history of the foghorn (hosted by author Jennifer Lucy Allan, a bona fide expert on foghorns and other esoteric sounds). Other sessions sought to pull back the curtain on the mystical worlds of lucid dreaming and tarot card reading. Most took place poolside at a secret villa nestled between hills on the north of the island, and I opted to enjoy them with a complimentary tequila cocktail in hand - we were still in Ibiza, after all.

In essence, the Beat Hotel offers all the luxurious trimmings of a premium stay without the confining four walls of an actual hotel. Peckish? The hotel "restaurant" provides numerous pop-up dining experiences in some of the island's most beautiful restaurants, from Balearic lunches served up at the HQ villa, to once-in-a-lifetime culinary collaborations between London's gold-tier restaurants and Ibizan institutions (or twice in a lifetime, in the case of trendy London tapas restaurant Barrafina's two-evening residency in Hostal La Torre's mesmerising clifftop restaurant). There's no buffet table or inclusive-only drinks list in sight; instead, I found myself feasting on an eight-course tasting menu cooked up by the team behind Hackney Wick's Michelin-starred Cornerstone restaurant as they took over the rooftop at Ibiza Town's Montesol. Squid ink cacio e pepe, steak tartare, cured bream, and oysters served with a seaweed hot sauce - a menu Paris Hilton herself wouldn't turn her nose up at.

To unwind, I booked in for a jam-packed schedule of nighttime events, including club takeovers and sets from world-class DJs, across a selection of quintessential Ibiza venues and under-the-radar locations I might not otherwise have stumbled upon. One night, I'd be enjoying ambient back-to-back sets from the likes of Andy Wilson, Cici and Willie Graff; the next, I'd be dancing poolside at the iconic Pikes, enjoying 11am-to-early-hours performances by Bradley Zero, Raw Silk and Sun Junkie.

The crowning jewel in the hotel's itinerary fell on the Thursday night of my visit, which boasted not one, but two performances from one of dance music's most beguiling forces, Róisín Murphy. The Irish songstress brought her unique disco stylings to a free, open-air gig in Las Dalias, before later performing a more intimate set inside the venue's club space, Akasha. Murphy attracted a diverse crowd that only she could be responsible for: the island's young, pierced and scantily clad queer population mingled harmoniously with Ibiza veterans, everyone equally starry-eyed over the singer's singular stage presence and amapiano-esque renditions of her catalogue of hits.

Perhaps the best act on Beat Hotel's line-up, though, was the crowd. As a solo traveller, I needn't have worried about making friends. We were a diverse group of holidayers, connected only by involvement in this transient island experience. People of all ages, nationalities and backgrounds converged, letting inhibitions go. I had original conversations with folk I, a 27-year-old Irish journalist, would likely never otherwise have crossed paths with. Idly threading water in the villa pool with a mid-30s Gibraltarian solicitor and a Birmingham-born Ibiza regular in his mid-50s, I fell into a conversation reflecting on a recently experienced tarot card reading by the eccentric novelist David Keenan. Someone referenced the writer's comment that anyone can learn to read tarot; that there's no psychic ability required. The cards are not designed to predict your future, he'd argued, but rather to help you see what might be holding you back in your present. "Sure," I agreed. "I mean, it's not magic."

"Well, but it is," my new Brummie friend countered. "The magic comes from within you, to make the change in your life afterwards," he posited, before taking a final sip of his mango and chilli margarita, diving underwater and emerging out of the other side of the pool, leaving the remaining pair of us to ponder his words.

Travellers have access to iconic music venues across the island.

That the Beat Hotel organisers also tended to favour smaller, intimate venues just slightly off the beaten track helps show a different side to the island, too. Put it this way, you're not likely to encounter a sunburnt 18-year-old pushing wristbands to any of these events on the strip.

This isn't a full-whack, all-inclusive week in Marbella, bar crawl included. It's no flop-and-fly. There are a few (simplified) sums required to work out what you're wanting to pay for, with events varying in price. Some are free, like the open-air Róisín Murphy concert, and others can cost up to £80-odd. Plus, you have to pay separately for your (discounted) accommodation and flights. Villa day passes - purchased for £22 - offer the closest you can get to the all-inclusive experience, providing access to both morning and afternoon sessions, plus lunch and a cocktail. But in some ways, this still feels like a package. It's more the spirit of an all-inclusive that I found in the Beat Hotel. It was an experiential introduction to island life; a way to encounter the sequin-stitched facets of the Ibiza experience that I otherwise might have missed. And anyway, there will always be additional drinks to be bought. Ibiza is a notoriously pricey destination, so I can't promise you'll return home with a bulging wallet after a week of fine dining and clubbing till the early hours, but hey, we can just put that down to the cost of sliving.

Prices for day passes to the Beat Hotel villa (including lunch and a cocktail) start from £22. Additional individual events, including wellness sessions, cost from £13. Accommodation at Las Mimosa and La Torre is available with a 20 per cent discount for Beat Hotel attendees.
beat-hotel.com
Discover More
The Rave-olution: How Dance Music is Destroying Divisions in Albania, Serbia and Georgia
Read now