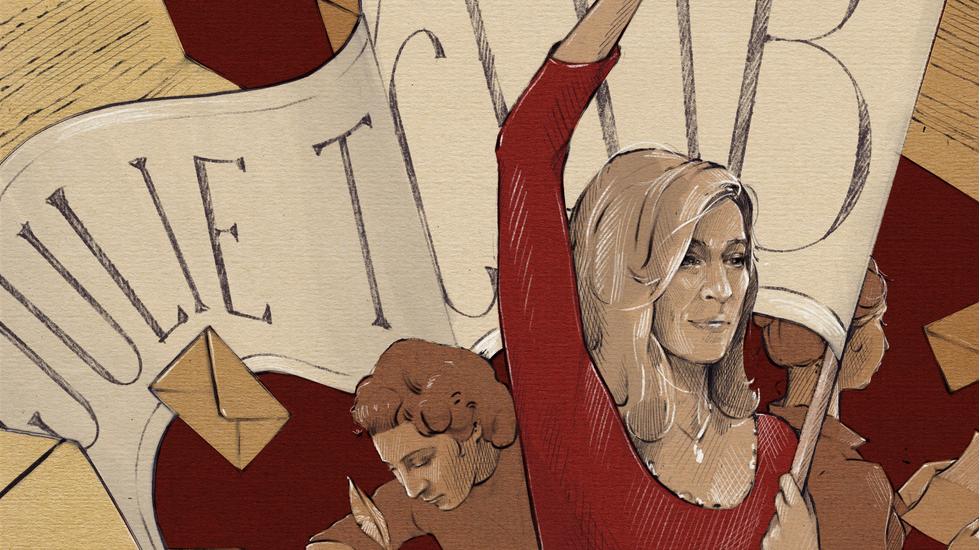 This article appears in Vol. 33: Collective.

When When Shakespeare chose Verona as the setting for Romeo and Juliet at the end of the 16th century, he'd almost certainly never visited the ancient Italian city. Despite this, his words captured Verona's beauty to such a degree that, 400 years later, the "star-cross'd lovers" and their tragic fate are the city's main attraction.

Each year, many thousands of visitors flock to what was supposedly Juliet's balcony, the faded crest of the Cappello household visible in the medieval courtyard. The historical connection is shaky, but Juliet's house has become the shrine to Shakespeare's tragic heroine, and Verona a place of pilgrimage for hopeless romantics. While some carve their names into its stone walls or kiss their significant other on the nearby Ponte Pietra, many heartbroken lovers appeal to the mythical Juliet by letter.

Anyone familiar with the 2010 film Letters to Juliet, starring Amanda Seyfried and Christopher Egan - with a questionable English accent - will know the story. Visitors stuff letters into cracks in the walls and a special post box, asking Juliet for counsel on their love lives. Such notes are posted from across the world, too, often simply addressed "Juliet, Verona, Italy". Most interesting of all, someone replies to them.

The letters started arriving in the 1930s, at which point the caretaker of Juliet's tomb, Ettore Solimani, felt compelled to write back in sympathy. What began as an occasional correspondence gradually grew into a full-blown industry. "It's hard to keep track of all the letters, but now we receive more than 10,000 a year," says Giovanna Tamassia, the glamorous guardian of all things Romeo and Juliet in Verona. She's the President of the Juliet Club, a role she took over from her father Giulio when he passed away three years ago.

Under Giovanna's direction, letters are gathered in a tiny office, where 15 permanent secretaries and an army of international volunteers reply to every single one. The secretaries - mostly women - come from all walks of life: students, authors, travellers, retired diplomats. They have no formal qualifications, but are trained by existing secretaries in how to answer people's romantic problems, striking a balance between kindness and practicality. They order the letters by language before archiving them in a papery labyrinth. "It's become a wonderful part of Verona's culture, everyone in the city knows that," Giovanna tells me over the phone. "We receive letters in Arabic, Russian, Finnish, even braille. The main theme is love issues or the search for love."

Generations are seen as superficial or addicted to social media, but when I read their letters, I know it’s not true.

In the name of research, I put Juliet's secretaries to the test with a letter of my own. My original plan had been to make up a tale of heartbreak so that I could pass on any sage advice in this article. But as I sat, pen in hand, the third draft of my letter scribbled out before me, I was shocked at how introspective I felt. Was I missing my ex-boyfriend? What about that Italian summer romance that never materialised? "Juliet, am I in love with my best friend?" I finally wrote, shocking myself as I dived into details of our trans-Atlantic escapades.

One of my friends had a similar experience. Sentimentally unsettled, she cried as she jotted down her dating disasters. "Writing out your own thoughts is a kind of therapy for people," Giovanna muses. "It's a way to make your thoughts clear. Telling someone you don't know can be easier than confiding in a friend."

The secretaries have noticed that people from different countries write about love in different ways. In letters from South America, passionate descriptions are reminiscent of telenovelas; Japanese writers tend to be more reserved with their emotions. "But love is felt deeply all around the world," Giovanna says with certainty, a fact cemented by the letters she receives day after day.

The letters' content has changed somewhat during Giovanna's 20 years of responding, but she continues to be touched by the depth of feeling that young people express. "These generations are seen as superficial or addicted to social media, but when I read their letters, I know it's not true. Teenagers write about self-esteem, about first love, their deepest fears and family problems. I don't know if I can answer them nowadays; I have two daughters so the advice I give is more like a mother than a friend. But I still like reading them."

Among the angsty confessions of sleeping with one's ex and stories of unrequited love, these private correspondences are also a medium for current social issues. Giovanna tells me about letters dealing with interracial relationships and those in which financial worries add strain to romances. "Sometimes you have people from religious backgrounds, maybe a young Hindu or Muslim asking for Juliet's help in an arranged marriage. Recently, we had a chaste Christian from the US seeking advice on being submissive to her husband."

"It's not easy to give the right answer," she continues. "Maybe there are some situations that don't belong to our way of life here. You're just an Italian woman or an English visitor coming to help, so you try to give kind words, the feeling that there's someone out there who reads and answers and cares, without judging."

Unlike mindlessly swiping through dating apps or struggling to keep a romance going over FaceTime, there's solace in the slowness of handwritten letters. People can email the Juliet Club too, but this only makes up 10 per cent of the correspondence it receives. There's something strangely beautiful about pouring your heart out to a fictional 16th-century martyr about Hinge and ghosting and morning-after pills, and half believing that she'll understand. The real Juliet Capulet, if she existed, would have died from that fatal dagger wound around 700 years ago. What would she have thought about Tinder etiquette?

"I like to think she would have been pretty open-minded," says Giovanna diplomatically. "Shakespeare's world was undeniably very different to today, but Juliet was a very strong character. She had the strength to fight against her parents, she had the courage to take the poison to fake her own death, to be put in a grave, to wake up among all those dead bodies. She risked everything for love; I think she would have understood."