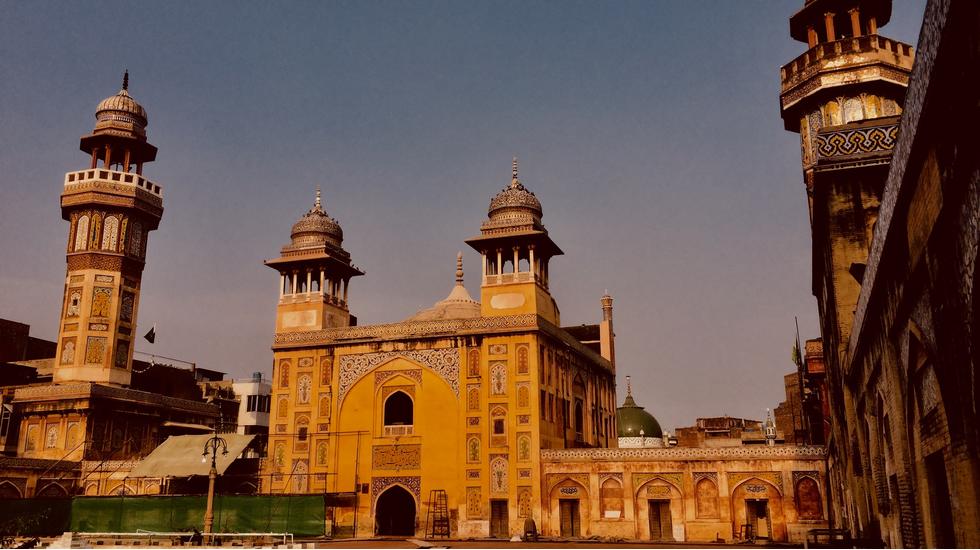 As As a diaspora writer, walking through the Old City streets of Lahore is like looking through the peephole of an antique, hand-cranked kinetoscope. The brown-tinted Victorian-style colonial structures and softly red-toned Mughal buildings remind me of postcolonial literary studies from my old university coursebooks. Their connections between place and identity begin to provide a sense of belonging, while at the same time, a sense of alienation.

Being born in Lahore, I've been fortunate to spend a few months each year in Pakistan at my family home. It's where I go to take time out from the gloom of Birmingham, and every visit is a chance to get to know my city of birth better. When my latest trip was due, I planned to discover Lahore through its architecture.

My journey begins in Shahdara Bagh, which lies on the western bank of the now buffalo-swamped Ravi River. I head to the Tomb of Jahangir, a 17th-century mausoleum to a Mughal emperor that has sat on the tentative list to be a Unesco World Heritage Site since 1993. Its cypress trees and the charbagh (a four-fold symmetrical garden divided by waterways) remind me of the descriptions of paradise mentioned in the Islamic verses of the Quran. It feels like I've time-travelled directly from the past into a paradisiacal future of my Muslim belief.

I'm met by a group of craftsmen working on the tomb's restoration. Perched on a concrete slab, Muhammad Asif is fine-tuning the geometric effect on the jali (latticework) screen panel, using a hammer and a large nail.

"This is sangemarmar (white marble), which we can now find in Pakistan. Previously, it was [made from] white Makrana marble supplied from India," Asif tells me. "We cannot even change the stem of the floral motifs, it needs to be a readaptation of the past designs with the same positioning."

Farther along the verdant garden, I meet Muhammad Abid, a working foreman. "I take care of all the repair works at the historical buildings of Lahore, including Shalamar Gardens, the Royal Fort and Badshahi Mosque," he says. As with many of the other artisans, Abid's skills have been passed down through generations. Once the design is agreed upon, he carries out the drawings according to the size of the Mughal designs, which are then fine-tuned and fitted. Measuring the red-sandstone panels finely carved in cusped arch tracery shapes, with bottles, vases and flower motifs mottled white, he is feeling rather pleased. But it's what he says that lingers in my memory: "I am happy with what I get paid, but we are not given the respect and appreciation we deserve."

Preserving architectural wonders helps define the historical, social and cultural identity and spirit of the city. Buildings' appearances structure our imagination and memory. A peculiar exchange occurs: I lend my emotions and associations to the place and the place lends me its atmosphere.

Nowhere is that better epitomised than at Rang Mahal market - the so-called "palace of colour" - where old buildings and alleyways are filled with wholesale traders selling food, textiles, crockery and jewellery - the list goes on. Here, I recommend trying the street food ladoo pethiyan (lentil patties) garnished with sauces and salad, while sitting on a simple wooden bench, enjoying kaleidoscopic views across the stalls, people and noise to the minarets of the Wazir Khan Mosque.

It is in Rang Mahal market, among the many colours of Lahore, where I feel my homeland sending messages to me through the land beneath my feet. My western clothes are drawing attention. How strange it is to feel both at home and not at home.

The arches and roof of the Wazir Khan Mosque are covered in glazed-tile mosaic work in yellows, greens and blue; its spiral staircases lead you to the rooftop, from where you enjoy panoramas across the bright city. I perform ablution while squatting on a marble block by the small fountain of the courtyard pool. Getting ready for prayer permits me to engage fully in the spiritual dimensions of the building. Yet my consciousness is quickly directed back to the present world when I spot a cat quietly sleeping on a prayer mat.

It's so different from Birmingham. Back there, the Selfridges building in the city centre is simply covered in silver discs, expressing itself without the need for ornamental decoration. In Lahore, I dine on a rooftop overlooking the Badshahi Mosque crowned by bulbous domes. As the sun sets, a flock of birds flies around its octagonal towers and the adhan (call to prayer) echoes through the high walls of the Lahore Fort embedded with miniature paintings of the Mughals.

I'm reminded of one of my father's old stories. He often tells me about a show of sound and light that bathed the walls of the Lahore Fort in the 60s. As the show progressed, he recalls, spectators learned about the Mughal Empire and then the era of British colonial rule. The information came slowly at first, then quickened with the intensity of the sound effects.

For further study of past events, the Victorian-style Quaid-e-Azam Library, constructed in the mid-19th century during the British Raj, has a collection of more than 125,000 books. Flipping through its bookshelves feels like I'm being transported back to university, when lecturers described cultural imperialism.

Onwards to Haveli Barood Khana, an 18th-century mansion built during the Sikh rule. Currently owned by Yousuf Salahuddin - or Mian Salli as everyone calls him - the haveli has a breezy, plant-filled central courtyard with a wooden swing strung up by ropes draped with fresh, white daisies. Though a busy socialite of the Pakistani entertainment world, Salahuddin is extraordinarily warm and invites visitors to stay for chai. This is the kind of place where wealthy Lahoris attend traditional folk concerts and rent out rooms for private events. I can see why; the haveli's location is away from the bustle of the city along with its intricate balconies and antiques create a regal, opulent atmosphere.

As I head back home, passing through central Lahore and into the outskirts, the buildings are less dusty and crumbling. Between luxury villas on lush green lawns, mosque domes appear larger and grand shopping malls seem to be illuminated brighter. This cityscape is down mainly to the artistic designs of Nayyar Ali Dada, an architect who famously dotted Lahore with breathtaking public buildings. With respect to the historic city, his work injects a modernist touch. Completed in 1992, the cultural hub of the Alhamra Arts Council is perhaps his most outstanding creation - its high walls reminiscent of the Fort; the red sandstone a nod to the Mughals.

Each time I travel back to Lahore after weeks spent in Birmingham, I feel like a child who has discovered something for the very first time. Like a piece of music, Lahore's architecture can move me, influence my mood with a distinct excitement, and affect the way I experience myself in the city and the city in me.

Discover More
Art Deco by the Sea: Coastal Culture and the Architecture of Escapism
Read now