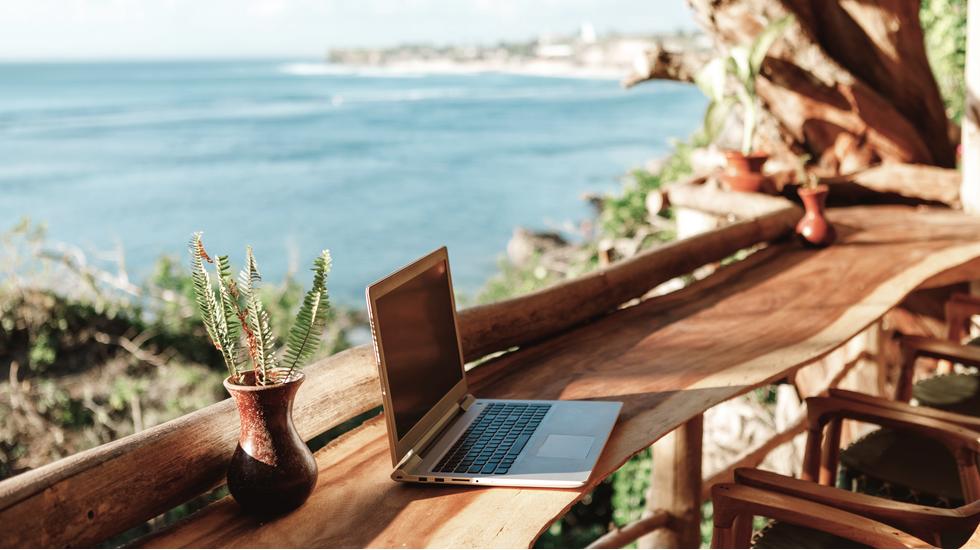 As As I write this, I'm sat on the deck of a hotel, on the southern coast of Turkey. It's November. I'm wearing shorts. There is gentle chatter in the background and, when my writing is done, I'll be paying the equivalent of £3 for shakshuka and heading to the pool for a couple of hours. The three-hour time difference from the UK means I get to have a sneaky break while people respond to the emails which would have seemingly been sent to them at 6am.

Work and holiday. Two words usually considered contradictory, but with the rise in popularity of side-hustlers, and liberation provided by fast WiFi and Zoom, they're no longer living apart. We all have spaces where we feel most alive - whether that be a certain city, perhaps a farm or an island. When we visit, it's not uncommon for many of us to think: "I might have to do some work when I'm out there." But there's another way to consider things. A way which makes your craft part of your travelling experience.

Alexandra Shulman, former Editor-in-Chief of British Vogue joked in her Desert Island Discs interview that when she was growing up, people with side-projects were mockingly referred to as "the projecters". It used to be uncommon. Why spend your free time working? In 2020 however, it's almost as common to have multiple professions, as it is to just have one. Whether you're a multi-hyphenate, slashie or side-hustler, having multiple strings to your bow has become the norm. So when you spend much of your "free time" working, what does that mean for holidays?

As someone who runs a digital publication and podcast alongside a full-time job in marketing, I'm all too familiar with the challenges and opportunities this lifestyle presents. I was interviewing DJ Laani recently for my podcast Hot Girls. She's a radio presenter on Worldwide FM and also works behind the scenes at Brownswood Recordings. I asked her to describe her dream day and this is the answer she gave:

"Me, on a boat, with beautiful sea - blue and gorgeous - sat on the deck with my computer, working away quite happily and the sun is shining. If I could be there in five years time… ahh."

Is she on holiday or is she working?

When I was growing up, the commentary around work was generally negative. It was something that limited you from doing the things you wanted (socialise, travel), rather than something that enabled you to do those things. For me, work has always felt quite grounding. There's a certain something about the feeling that comes when you're moving a project forwards - and it's this relationship to work that has changed the way I feel about travel. Rather than looking for escapism, I look for inspiration. Rather than somewhere to switch off, I look for somewhere to creatively invigorate me.

I put the question to my Twitter followers: "Creatives or musical people. When you go on holiday, do you like to work from there? Does your dream day involve working in a hotel?" And the answer was a resounding "yes". Stockholm, New York and even Ibiza came back as places people liked to go with a task in hand.

For many musicians working today, their instrument is their laptop. Orchid, a singer and music producer, said: "I'm obsessed with my work so I would always prefer to be away with a purpose and see some amazing things at the same time." Music PR George Service opted for a trip to Stockholm as a remote working base, while author Nate Holder said: "I spent 10 days in Rio. My productivity was off the charts!" Jewellery designer Lucille Whiting commented that her suitcases often included beads, ribbons and polishing equipment.

It appears that, for creative professionals, the stimulation of a different place can alleviate some of the stresses of work and reconnect us to the joy of it. It's an experience which can then enhance your trip, rather than disrupt it. Rather than being a chore, the work becomes an integrated part of your trip. You discover new cafés and workspaces. Enjoy a change of scene without falling behind or losing grip of the things which ground you.

That's what makes the working holiday a special kind of travel for me. You're moving through the world while also moving forward in your career.

Discover More
Working from a Hotel is the New WFH: Eight of the Best Workation Destinations
Read now