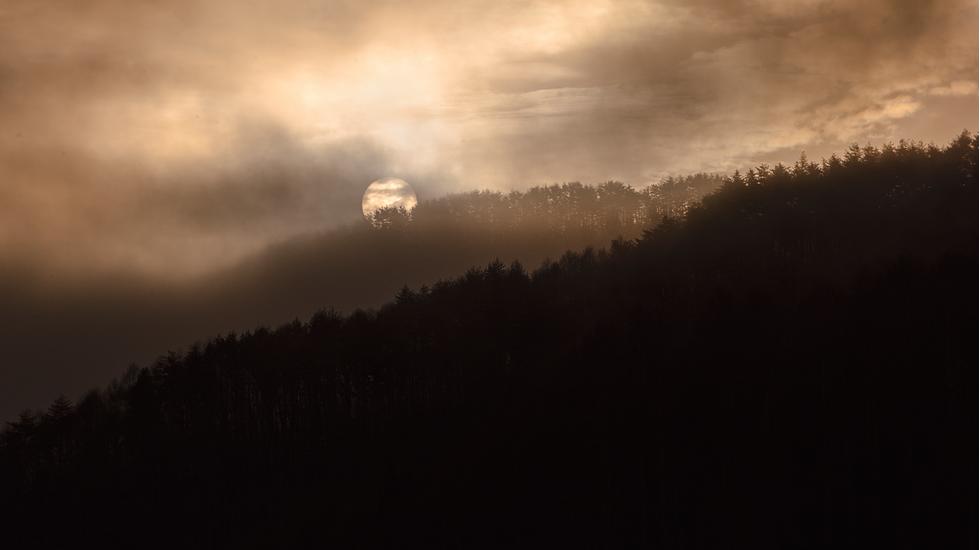 For For all its many advantages - the nightlife and constant novelty, the thrill of having some of the world's greatest cultural landmarks on your doorstep - the reality of living in a major city like London means that moments of calm are often hard to come by. In between battling a packed tube carriage and hastily gulping a sandwich on the go, the occasional pockets of quiet one does manage to find are to be treasured.

It's in search of peace and quiet - and slightly exhausted from the hoopla of the festive season - that I head to Japan's Nagano Prefecture. Unlike high-octane Tokyo, with its frenetic pace and neon-tinged streets, Nagano is known for its slower pace of life and a focus on health and wellness. Many of its wellbeing practices are rooted in traditional Japanese culture and history - spirituality, ritual, mindfulness - that still inform the nation's contemporary lifestyles, making it an ideal long-weekend destination for topping or tailing a lengthy trip around Japan, or a place in which to spend a little more time if, as I did, you want to fully decompress.

Having landed in Tokyo I hop on the Shinkansen, one of Japan's famous high-speed bullet trains, which delivers me to Nagano City in less than 90 minutes. I'm up early the next morning for my first experience of shinrin-yoku - forest bathing - in the nearby village of Togakushi. Contrary to what the name might suggest, there is no bathing, nor indeed any water, involved in my excursion. Rather, "forest bathing" is a cornerstone of preventative health care in Japan, a practice developed in the 1980s which marries mindfulness and spending time outdoors. Alongside the more obvious mood-enhancing perks one might expect from spending time in nature, its benefits are believed to be as wide-ranging as lowering one's blood pressure and boosting the immune system.

Nagano has the greatest number of officially designated forest-bathing areas in Japan and as I embark on the Five Shrines walk, a 2.5-hour walking route at the base of Mount Togakushi that takes in (as the name suggests) five Shinto shrines, it's easy to see why. Giant cedar trees stretching hundreds of feet into the bright-blue sky flank each side of the path and shallow streams zigzag off into the distance. The forest has been freshly coated in a thick layer of snow that silences the already dense quiet and I pause a few times to appreciate the novelty of near-total silence, interrupted only by the sound of snow crunching satisfyingly underfoot. Though I'm here in winter, the area around Togakushi is also popular between spring and autumn due to its abundance of hiking trails and campsites. I'm struck by the sheer scale of everything I encounter, from the ancient trees to the distant mountains that jut into wide skies. Even the moon here is super-sized - one evening I watch it slowly emerge from behind the mountains to rest on cotton-candy clouds, something I later find out is known as a "moon illusion".

Togakushi also has an abundance of soba restaurants, thanks to the quality of buckwheat grown in Nagano. Soba noodles are something of a local specialty, and given their buckwheat foundation also count as a bona-fide health food. For lunch I head to Yamaguchiya to try my hand at noodle-making, kneading buckwheat flour and fresh mountain water into a thick dough before attempting to fashion thin strips as demonstrated by my instructor, who just happens to be a trained ninja. Thankfully I'm not destined to eat my own distinctly sub-par creations. Instead, I'm whisked upstairs for a meal of assorted soba-based dishes including freshly prepared noodles with dipping sauces and a dessert of steamed dough balls soaked in a sticky caramel that leaves me greedily eyeing my fellow diners' plates. Much of what I eat in Nagano is sourced or created locally, from the miso paste and sake made in one of its many breweries to the apples (the region is abundant with them) that turn up in everything from pies to jam.

Nagano City is also home to the Zenkō-ji temple, the popularity of which is a prime example of how spirituality and traditional customs pervade modern Japanese culture. Visits to major temples such as this are a regular among many Japanese people, even those who aren't strictly religious. Even for neophytes like myself, guided by one of the temple's monks, Zenkō-ji reveals the mind-clearing potential of Buddhist activities such as Zazen meditation and Shakyo, a form of traditional calligraphy in which one copies Buddhist sutras - it requires keen concentration, but is surprisingly soothing.

Most visitors to Zenkō-ji will join the O-Asaji, the monks' daily sunrise service - it's well worth the early start. A high priest leads a procession through the streets to the temple, offering blessings to those lining his path. Then it's into the temple's main hall for the ceremony, around half an hour of monks chanting sutras and offering devotions. As they sit cross-legged in the candlelit hall, the monks' deep voices and sonorous chanting take on an almost hypnotic quality.

There are around 36 smaller temples clustered around Zenkō-ji, many of which offer accommodation for tourists, and I opt to stay at Fuchinobo. Here the rooms are simple but cosy and well-maintained, laid out in the traditional Japanese style with a separate sitting room attached to my bedroom. The highlight of my stay is the shojin ryori meal served for dinner, shojin ryori being the traditional vegetarian style of cooking commonly practiced by Buddhist monks. One might expect such a meal to veer towards the austere, but in fact it's a colourful array of thoughtfully prepared vegetables and seasonal dishes: fried turnip stuffed with miso, winter greens cultivated in snow and a panna cotta-esque dish topped with slices of kiwi fruit.

Before arriving in Japan, I'd heard plenty about its famously welcoming attitude to visitors - and the reality doesn't disappoint. Everyone I encounter is so hospitable that it would be hard for even the most hardened city slicker to find a reason to work up a steam - that is, unless you're bathing in one of the country's many onsens. As a volcanically active country, Japan has thousands of natural hot springs, many of which are used for bathing by residents and tourists alike. The ritual of onsen bathing is a big part of Japan's leisure culture, with the mineral-rich hot-spring water believed to have therapeutic benefits. One of the best - and most famous - destinations to enjoy an onsen in Japan is Bessho Onsen, a hot-spring town easily accessible by train from Nagano station.

My accommodation for the night is the plush Kashiwaya Ryokan (a ryokan being a type of traditional Japanese inn). Upon arrival I'm greeted with a large mug of matcha tea in a shade of green so deep that it's immediately clear that this is the real, fresh deal, not the stale stuff I sometimes drink at home. My suite is palatial and comes with its own patio, sitting room and private outdoor onsen, although like most onsen resorts Kashiwaya also houses an array of large communal baths. I sit immersed in the water leafing through a book until it's time for dinner, which is an unsurprisingly indulgent affair: a 12-course meal served in one of the hotel's private dining rooms. By this point I am comfortable enough to float around in a yukata, a light-cotton kimono helpfully tied for me by a member of staff. Plate after plate of roasted yellowtail snapper, sweet fish stew and assorted sashimi ensues.

Kashiwaya is luxurious enough that it would be entirely possible to stay ensconced there for the length of your time in Bessho Onsen, but it's worth prising yourself out of its comforts for a stroll around town, where quaint shops and cafés nestle between two elegant Buddhist temples: Anrakuji and Kitamuki Kannon. Stopping by Café Garden Berry to grab a coffee one morning, I'm easily persuaded to try a few slices of Japanese- style toast covered in honey and soy-bean powder - the café's owner reassures me of soy's health benefits while plating up seconds.

Onwards to Karuizawa, my final stop. Well-heeled Tokyoites have long kept second homes here as an escape from the capital's steamy summers and for easy access to nearby ski resorts in the winter. Accordingly, the town is well-served by a selection of cocktail bars, restaurants and artisan shops selling everything from upscale homeware to locally produced honey. Nevertheless, Karuizawa has maintained its peaceful quality and abundance of greenery thanks to strict local development regulations. At the end of the high street I find a rustic open-air restaurant, where I sit by a wood-burning stove sipping a local beer as snow starts to fall. Karuizawa's best lunch spot is undoubtedly Log Tei, another cabin-style restaurant that operates a traditional Japanese barbecue. No sooner have I settled in at its low dining table than a platter of prime wagyu beef and vegetables is presented. I spend the next hour or so happily grilling my own lunch in the sunken pit before me.

Karuizawa is the perfect jumping-off point from which to explore Onioshidashi Park, an area of volcanic rock formed by solidified magma from the last major eruption of nearby Mount Asama which, on sunny days, is visible in the distance. The forest surrounding the town is rich in wildlife - on the drive from Onioshidashi back into town a trio of wild boar skip across the road in front of me, disappearing into the bushes as quickly as they appeared. Perhaps they're on an outing from Karuizawa's Wild Bird Sanctuary, an area of protected forest managed by wildlife conservation centre Picchio. On my final morning I opt for a birdwatching tour led by one of its extremely knowledgeable guides, who explains the forest's delicate ecosystem of predator and prey as we weave through wisteria and camphor trees scattered along the trail.

I travel around Nagano with a copy of artist Jenny Odell's critically acclaimed How to Do Nothing in tow and I'm constantly surprised by how closely my activities mirror her recommendations for "doing nothing", which she defines as the act of reclaiming one's attention from the rabbit hole of social media and the relentless mandate of workplace productivity. Connecting with nature. Check. Meditation. Check. Birdwatching. Check. Nagano's greatest hits just so happen to offer plenty of opportunity for restful contemplation. This is as far from the commercial wellness scene as it gets, too - no gimmicky treatments or pointless elixirs, just the basic ingredients of good health. Fresh air. Nature. Space. Time. The only challenge I anticipate is maintaining the sense of calm when I get back home to London. I'll let you know how I get on.