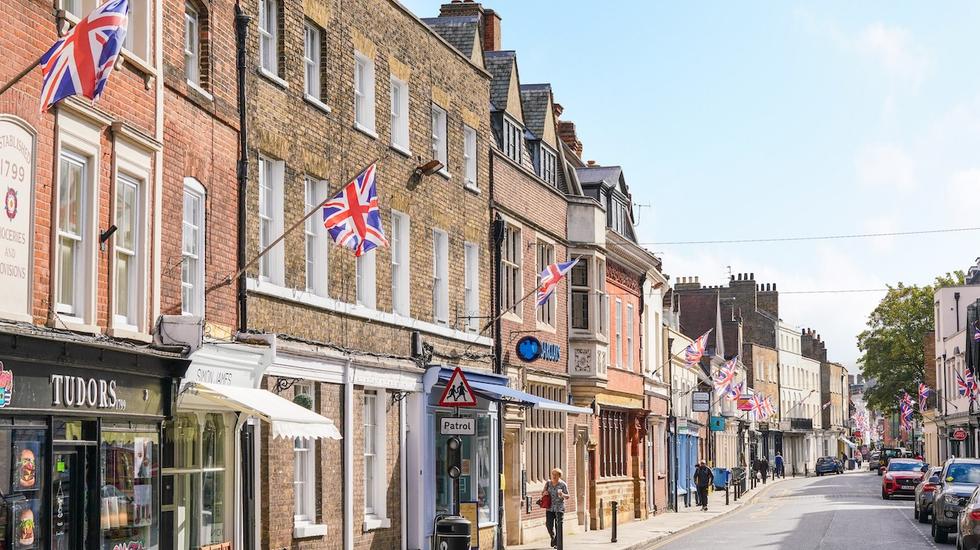 With With its bunting-clad walkways, picturesque cobbled streets and rather royal neighbours, regal Windsor (and the surrounding area) had maintained its stiff upper lip and prim and proper reputation for decades, until, that is, Alex Eagle turned her attention to the county of Berkshire last year.

The eagle-eyed Londoner (sorry, we had to) and curator behind one of London's coolest concept stores paired up with her long-time friend and collaborator Sophie Hodges to revamp a stately gothic pile on the town's edges, pushing expectations for a renegade renaissance in the royal enclave to fever pitch. The refreshed Oakley Court is a full-throttle celebration of British eccentricity, characterised by bold colour schemes, an excess of chinoiserie, Le Corbusier-style chairs and surplus fringing, plus a riverside restaurant simply made for summer soireés.

First it was Margate, then Deal, then Frome and Bruton followed. Now, it's Windsor and Eton's time for a revival. That royal retiree reputation the area has had for so long? Off with its head. Further openings have followed the Oakley, enticing well-heeled Londoners into the hills and capturing affections with seductively styled suites and capital-quality menus. Glossy-haired visitors are drawn in by Windsor's heritage and the tantalising vision of lazing beside the meandering Thames, Pimm's in hand, on a balmy Sunday afternoon. Now, Berkshire is on its way to becoming a flag-waving example of British excellence - and Londoners are dropping their Cotswolds boltholes in their droves in favour of its monarchical charms.

With regular trains from Paddington transporting you to Berkshire's rolling green hills in just 30 minutes, we're earmarking Windsor and Eton as the new weekend escape of choice. Here's where to head when you venture into the royal realm.

Wonderful Windsor and Eton: what not to miss

Treading the line between picturesque period drama set and modern-luxury boutique escape, Oakley Court, which opened last May, is a dreamy English summertime stay. Positioned beside the River Thames in a Victorian mansion house dating back to 1859, its aesthetic respectfully celebrates its heritage. Inside, traditional fabrics and modernist furniture characterise rooms spread across the mansion house, boat house and garden annexe, most of which overlook the slowly meandering waterway. Hire a self-drive boat, try your balance on a paddleboard or borrow a bike from the hotel’s fleet and cycle to Bray Lake for some open-water swimming. Don’t feel like getting wet? Pitch up at River House bar for an al fresco spritz, before dinner in the restaurant, hosted by a rotating calendar of guest chefs.

The Loch & The Tyne

There are only two rooms at Adam Handling’s Old Windsor rural outpost, but that’s what makes it such a welcome departure from the bustle of the town. Both feature homey touches like hot water bottles and hand-written notes – details that make it feel like you’re staying in the house of an old friend. Unsurprisingly, the restaurant is the jewel in The Loch & The Tyne’s crown. Helmed by the acclaimed Scottish chef, who trained at Gleneagles Hotel in Scotland, it’s a celebration of classic British pub food, brought to life in serene surroundings. Borrow a bike from reception to explore the Great Park – Her Majesty’s back garden, if you will – and make it back in time for the Sunday roast.

Situated on a cobbled street opposite the Guildhall, just a stone’s throw from the family pad of the Windsors, this palatial property couldn’t be more central. Interiors play to its 16th-century architecture, combining elements of the original Georgian aesthetic with neutral-toned modernity. The 108 bedrooms and suites are smart and functional, with considered design details – think original fireplaces, Farrow and Ball-painted panelling and, in a nod to the elegant creatures living in the nearby Great Park, a few papier-mâché stag heads mounted on the walls.