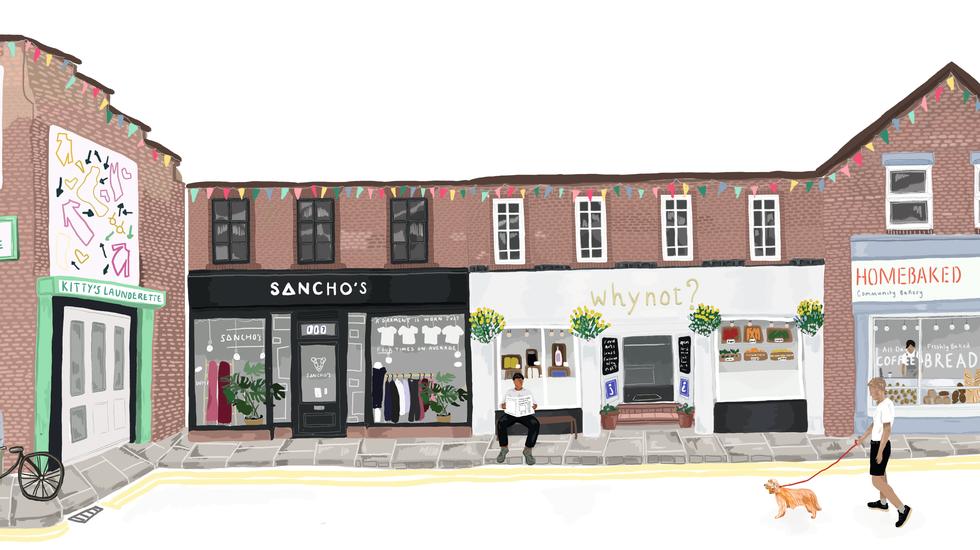 This article appears in Vol. 32: Homegrown.

The The British high street hasn't shut up shop. It's easy to buy into the narrative that the Great British high street is bust at a time when big-name businesses are vanishing quicker than a bag of Percy Pigs passed around on a road trip. In the first half of 2019, 16 stores closed every single day - the fastest rate on record. But instead of mourning mass retailers or bowing to the beast of online shopping - Deliveroo can even schlep your groceries nowadays - communities and independents across the UK are coming together to change their high street's fortune. It's not over. Not yet.

Faced with graffiti-strewn shutters and ghost-town streets, fierce community operatives are rallying to turn empty commercial spaces into neighbourhood hubs, while passionate, independent shopkeepers are breathing life into derelict buildings. In my former seaside home of Bournemouth, shelves shine with produce plucked from New Forest farms, the smell of sourdough wafts from family-owned bakeries and Boscombe's boutiques throw up vintage treasures... and the odd wetsuit.

Instead of seeing boarded-up buildings as barriers, locals up and down the country are coming together to reclaim their high streets. And they're succeeding. According to charitable trust Power to Change, community-owned shops have a 94-per-cent survival rate and a massive 56p of every £1 spent in a cooperative space is pumped back into the area's local economy.

Put simply, by buying my coffee from my neighbourhood roaster as opposed to Pret; by dropping into a Made by Ore jewellery workshop instead of trawling Asos; and by visiting The Ivy House - London's first cooperatively owned pub - rather than drinking my wages in Wetherspoons, I'm putting my money straight back into my community. Economically sustainable choices really don't have to mean going without.

For 85 years, Mitchells Bakery plied Anfield locals with fresh bread, rolls and pies. Yet in 2010, this residential neighbourhood in northern Liverpool faced demolition under the council's Housing Market Renewal Initiative and many residents were moved to alternative social housing. Mitchells had no choice but to shut. However, those locals who had stayed put bandied together, forming a cooperative that aimed to make something of the abandoned bakery. Their action transformed not only the bakery but many of the empty surrounding houses, which were transferred into community ownership. It's the same fighting spirit you'd expect from Liverpool F.C. when they're 2-0 down at half time.

Homebaked opened in 2013 with big plans and just three employees. Fast forward to today, thousands of crusty rolls, floured baps and Scouse pies later, it's thriving. There are now 20 people on the team, 80 per cent of whom come from the local community. They're baking 100 fresh loaves a day and 3,000 award-winning pies - the latter of which are made just a few miles away in Bootle, while meat comes from a butcher in nearby Walton Vale. Visit the bakery on match day - Liverpool F.C.'s Anfield Stadium is just across the road - and you'll see queues of Reds hungry for their homemade pie fix.

Sit down with any Anfield resident for a cuppa and they'll let you in on the key to Homebaked's success. "Community," says Sally-Anne Watkiss, Homebaked's Treasurer who's been with the collective since its early bakes. "Community business ensures that money keeps circulating in the local economy and that helps boost local enterprises." It's not just about balancing the books; loaf by loaf it has brought hope to an area once scarred by unemployment, failing fast-food joints and few opportunities. "By working together, the new high-street businesses grow together too," Sally-Anne beams.

Trot along Oakfield Road and you'll find Kitty's Launderette, a cooperative that has been a driving force behind Anfield's transformation since it opened in 2019. More than somewhere to wash your dirty socks, the launderette - powered by renewable energy - doubles up as a welcoming space. Locals knock elbows in its coffee shop and meet for events including "free tea 'n' toast" mornings, language classes and book readings. Forget wash-and-go, Kitty's wants its visitors to wash-and-grow.

Spurred by childhood memories of closed youth clubs and run-down theatres, Kitty's founder Grace Harrison had been inspired by Homebaked's success. For her, community-owned businesses are the future of the high street - and not simply because they offer affordable amenities. "By engaging with local people, our decisions can be led by our community's needs and desires," she says. In the short time they've been open, Kitty's Launderette has improved the wellbeing and eco-consciousness of its neighbourhood - and it's only by pulling together with others that this real, tangible change has happened.

It's a similar story in Catford, a south-east London suburb where community life revolves around its collectively managed orchard, grassroots film festival and monthly book clubs. Local authorities saw its residents' eagerness to buy back the town centre and so, after a successful kickstarter campaign raised thousands of pounds, Catford Mews was born. Taking over a former Poundland store, this independent cinema, event space and food court - in which local vendors serve everything from jerk chicken to Japanese street food - was exactly what the town had been craving. Its low-rent pop-up spaces, the kind of which are so rarely found in London's poorer areas, have become a lifeline for small, start-up businesses. It's an essential ally for those in an often-overlooked area.

It's not just cooperatives that can bring much-needed pennies to failing high streets. Many of the gaps left by bankrupt big businesses are being filled by innovative independents. There's a certain creative energy running through North Berwick, a Scottish seaside town dubbed the "Biarritz of the North". Here, a jewellery designer and antique furniture restorer came together to form Whynot? in 2013. Arguably Scotland's most successful independent marketplace, the venture transformed an abandoned supermarket into a locavore trading hub of fishmongers, apothecaries, artists, delis and florists.

Step into Whynot? and you'll be reminded of a time when the high street was the beating heart of the community. Market traders bellow to one another, chatter drifts from the café and your local food shop takes twice as long because you're busy swapping stories with the butcher, baker and candlestick maker. This is a place that is as good for socialising as it is spending.

High-street outlets aren't just about shifting products; in a world where online shopping is king, their USP is face-to-face interaction. Smaller, against-the-grain stores tend not only to offer well-curated wares, but encourage consumers back to town centres through using their space for a greater good. When high-street spending plummeted in Exeter in 2018, indie shop owners on Fore Street pulled together to protect their community and, through that, their own businesses too. Take Sancho's, for example. It sells sustainable pieces of clothing, organises clothes-swaps and hosts talks that raise awareness of the damaging impact of fast fashion. No Guts No Glory is part-café, part-greenhouse and part-interior haven which puts on regular craft workshops; not-for-profit Book Cycle supplies schools and orphanages with the educational resources they need.

As more and more independent and cooperative shops open, high streets begin to come full circle, shifting from soulless spaces back into the social centres of yesteryear. Of course, the pandemic will be blamed for some economic downturn. Yet, it was during the pandemic too that our appetite to buy local really flourished. It showed us the power of coming together. People supported neighbours in need; thousands of us applauded the NHS; many of us reacquainted ourselves with local producers in a bid to stand alongside our neighbourhood businesses.

Building on this refreshed community spirit, we can pave the thriving high streets of tomorrow. Instead of dwelling on the failures of mass retail, we should shift our focus to support the passionate, independent and community-led initiatives that are the key to rebuilding our high streets. For those of us who are able to venture outside, we need to stop leaning on our Amazon Prime subscription, step out from behind our screen and pop to the shops around the corner. The positive power of community and human connection is something that click-and-collect culture can never replicate. Now more than ever is the time to shop local, support local and buy local.