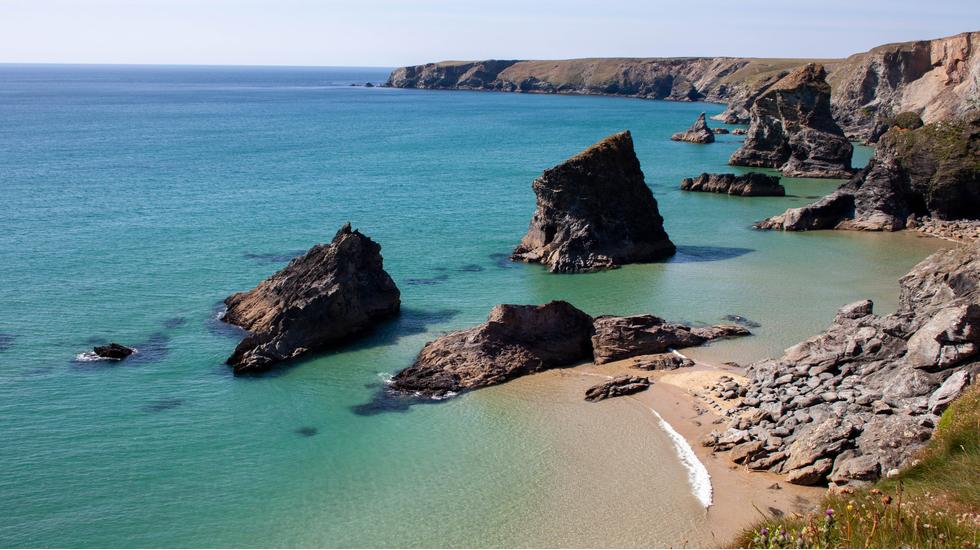 Amid Amid the rugged cliffs and old engine houses of Cornwall's north coast is an unassuming town of two personalities. St Agnes is divided by terraced miners' cottages into village and beach. In the village, boutique bakeries and delicatessens rub shoulders with zero-waste shops, a quaint high street and the kind of church that wouldn't look out of place in the Cotswolds. The beach below looks as though it has been scooped from the cliff using an enormous digger. Dramatic rather than conventionally pretty, the beach is a hive of activity year-round, an ocean playground for surfers, wild swimming groups and rowers.

Sandwiched between two famous neighbours, Perranporth and Porthtowan - both of which draw visitors during the summer and lapse into sleepy, almost eerie hibernation in the winter - St Agnes has a thriving community of permanent residents. Old mines and engine houses have been transformed into hubs of innovation and house brands of international acclaim (Wheal Kitty, perched on the cliff above Trevaunance Cove, is the home of ethical, outdoor clothing brand Finisterre). Former miners' cottages squeezed precipitously on vertigo-inducing hills have become picture-perfect holiday cottages. Walks along the coastal path in either direction reveal Elizabethan beacons, 18th-century mines and bunkers dating back to the Second World War.

Whether you're looking for a quieter alternative to St Ives for a summer break or a coastal escape during the winter months, St Agnes won't disappoint. We've traipsed coastal paths in the footsteps of the miners of old, surfed the waves and honed our pasty-critiquing skills to bring you the best of Cornwall's most up-and-coming little town.

Turn off your phones and unwind at this eco retreat, just 500m from the sea. With goats and resident owls as its closest neighbours, The Old Goathouse is the perfect place to get away from it all. There are plenty of beaches nearby, but you may just find that you’re too comfortable to explore at all. Look forward to al fresco dining on homegrown veggies, barbecues on the decking and evenings spent toasting marshmallows on the firepit, all to the soundtrack of the low hooting of owls.

Address given upon reservation

We can wax lyrical all we like about the delicatessens and cosy country pubs, but we’d be lying if we said that the main pull of St Agnes was anything other than the landscape. So why spend time between four walls at all? Blue Hills Touring Park is a no-frills-attached campsite with an enviable location and all the necessities. Weekly fish and chips nights and pizza nights and regular visits from a local coffee van are a welcome addition for those of us that would prefer not to spend half an hour cooking lukewarm Cup-a-Soups on gas stoves. Dogs are welcome too.

For sunset views that continue all the way down the coastline to St Ives, far in the distance, look no further than The Beacon Country House Hotel. Family-run, with just 11 rooms, extensive gardens and great food, it has an intimate feel to it. We’ll be stargazing over a chilled bottle of Camel Valley in the garden.

If you hadn’t already felt as though you’d stepped into an episode of BBC’s Poldark when you arrived in St Agnes and saw the old engine houses perched up on the cliff, you will when you arrive at No.2 Stippy Stappy. This Grade II-listed row of former miners’ cottages featured in the Poldark books. Now to run along the cliff tops in pursuit of Ross Poldark.

In the heart of St Agnes village, there has been an inn standing on the site of the St Agnes Hotel (known locally as “The Aggie”) since the 17th century. Later, when a railway line opened up from Truro to St Agnes, transporting tin from the mines to the city, the inn was transformed into a hotel. The railway line is long gone, but this is still one of the most conveniently located places to stay in town.