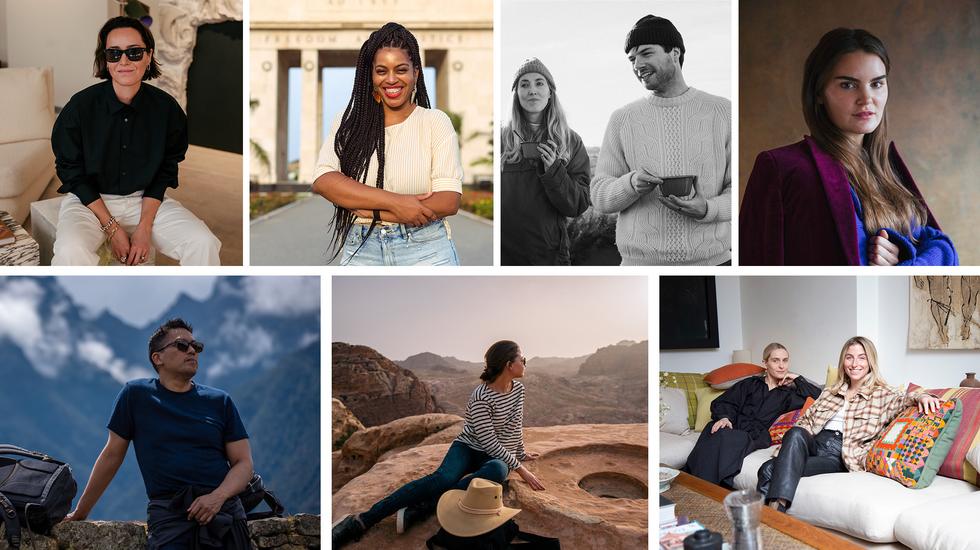 What What does "discovery" mean to you? Sashaying across golden sand on a far-flung island? Peering into a volcano, daredevil-style? Jumping into the serene waters of your nearest river on a hazy weekday morning, experiencing an unexpected moment of unbridled joy?

The truth is, it's personal. Discovery can be distant and dramatic, or intimate and ephemeral. To celebrate the launch of SUITCASE Vol. 36: Discovery, we've asked travel tastemakers and trailblazers what the word means to them. Here's what they told us.

"For us, discovery is an essential component of a happy life. It is the process through which we are able to expand our horizons, try new things and learn about the world around us. It offers endless possibilities and keeps us on our toes. A core ingredient in travel, discovery is the fruit of exploration that means no two days are the same. A life with discovery could never be boring."

Charlie and Jessica are the duo behind @the.travel.project and the founders of Achievable Adventure, a UK movement conceived to encourage regular exploration in our everyday lives. Read about their small-scale odysseys in the new issue.

"Discovery, for me, is about pushing myself beyond my comfort zone, leaving the communities and people we feel most at home with in order to experience new cultures, learn how others live and see first-hand who we share this beautiful planet with. I always return with a greater appreciation of where I come from and a better understanding of my place in the universe. Discovery challenges us to be better and more compassionate global citizens, where acceptance replaces the fear of what we don't understand or know. It may start with the curiosity to explore the world, but it also takes you on a journey to discover and find other sides of yourself."

Bruce is the founder of G Adventures, an award-winning small-group adventure travel company with a focus on community tourism. The company's new itineraries that explore a historic Bhutanese trail feature in Vol. 36.

"During lockdown, discovery flipped on its head. I was not only forced to explore my own local area more, but even my own home and self. As the world opens up and barriers come down, I am really relishing my newfound sense of freedom. I have been rediscovering my local city, London, and some great restaurants such as Noble Rot in Soho. In terms of travel, I am much more intentional and my next trips are all a big deep dive into Italy: Capri, Maremma, Florence, Porto Ercole and Portofino."

Serena is the founder of SUITCASE Magazine and SUITCASE Creative Studio. Her accolades include appearing in Forbes 30 Under 30 in 2017, being named among London's 25 most influential under-25s by the Evening Standard, winning a Woman of the Future award for media and Natwest's Entrepreneur of the Year award. She is a #CookForSyria co-founder, and part of the team behind #CookForUkraine.

"Every destination has a unique story waiting to be discovered, whether it's a hidden gem in your neighbourhood or a far-away land. Discovery is a chance to explore the unknown, seek out adventures and learn about new cultures. In addition to uncovering new things in the physical world, discovery is about keeping our minds open and agile, allowing for a broadening of horizons. That moment when you step out somewhere new and feel totally different about yourself, the world and all its possibilities is magical."

Robyn and Rachel are the founders of Step, an innovative app for finding, saving and sharing your favourite places across the world.

"Discovery for me is internal and external. It's a byproduct of curiosity, a value I hold deeply and live every day. It's that magical moment when something unknown becomes known and you can feel expansion in your heart. It is the result of seeking. It is a way to live. It is a practice that is core to me. It is travel; it is healing; it is love."

Cherae is the founder and CEO of Tastemakers Africa, a travel company dedicated to bridging the gap between the African continent and its global diaspora through curated travel itineraries.

"Discovery is about leaving the known and getting a bit lost. Before travelling somewhere new, I greedily gather up tips and suggestions for hotels, restaurants, galleries and shops, but the best moment will always be when you just follow your nose round a strange corner and find a fabulous shirtmaker or the best coffee of your trip. The same is true at home in London. Walking everywhere means that I am always heading down random alleys in Soho and finding new architecture and old shops. We think we know our home turf so well that it becomes just wallpaper, but there is always something new to discover if you keep your head up and your eyes open."

Alex is the founder and creative director of an emporium of businesses centred around design, fashion and contemporary living, including Alex Eagle Studio and Alex Eagle Sporting Club.

"What does discovery mean when we're talking about food? For me, it's about going beyond the taste and "Instagrammability" of a dish. It means delving deeper into the culture, history and personal stories behind each - as well as the recipes handed down over generations to create them."

Clerkenwell Boy is the anonymous gourmet guru behind the eponymous Instagram account @clerkenwellboyec1 and co-founder of @CookForUkraine and #CookForSyria.

"The joy of discovery is what drives the curious mind to adventure."

Charlotte is an award-winning Swedish designer and co-founder of London design studio Campbell-Rey.

"Discovery is an enormous topic of discussion in my circles. Discovery is subjective, very personal and can encompass so many things. For me, it's really a feeling - when the climate, people, nature, food and culture combine to create the perfect sense of adventure or calm. Discovery can change from one day to the next and, whether it makes you feel the most alive and excited or at peace and tranquil, it's the recognition and gratitude of that moment that is the greatest discovery."

Ben is an entrepreneur, hotel guru and editor-in-chief of online travel magazine AHotelLife.com.