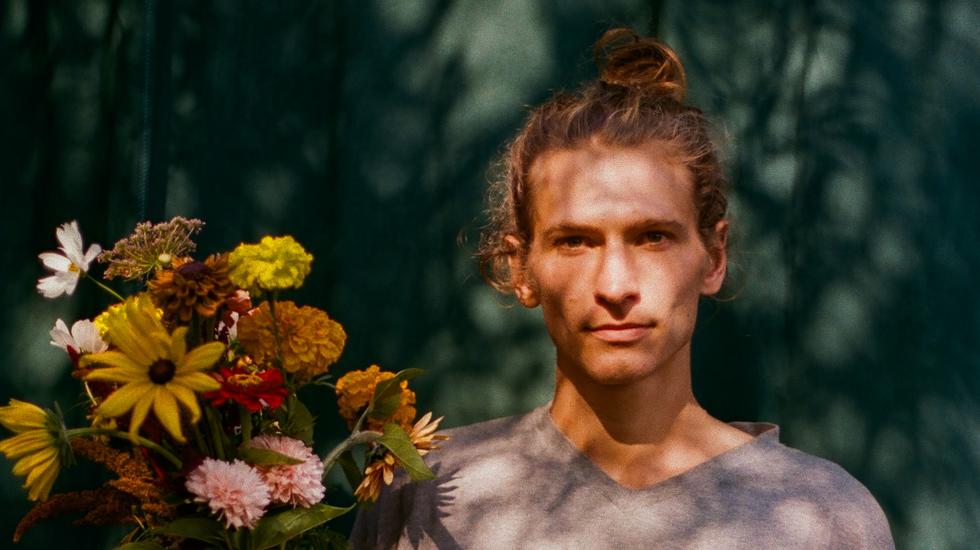 Joya Joya is admiring a fat pumpkin ripening in Dorset's late-summer sun. She has spent the morning chatting to farmers Lally and Tomas, who grow organic vegetables from an Edenic market garden just outside Wootton Fitzpaine. The produce might be thriving, but these young producers are competing with an industrialised system - and they want reform. "Pricing doesn't reflect the real cost of food," says Lally, clambering into their yellow Volkswagen van for lunch. "We need to consider the cost of labour, the cost of inputs, the cost to the Earth - which is, in turn, a cost to ourselves. To all of us."

In recent years, more than 35,000 small-scale British farms have closed down, mired in financial difficulty. Yet a quiet activism has taken root. "I've grown up around small-scale growers in west Dorset," explains Joya, revealing the inspiration behind her photo series profiling young, diverse growers leading the way in regenerative agriculture. "They're role models," she adds

The future of UK farming is being moulded by Brexit, climate change and the pandemic. For years, farmers and land workers have contended with policies favourable to large-scale agribusiness and retail - a system criticised for both degrading the environment and underwriting cheap food. Yet it's the more traditional, smaller farms that are cultivating social and environmental benefits, helping to regenerate the landscape.

On behalf of the Landworkers' Alliance (LWA), a union campaigning for better food and land-use systems, Joya travelled between rural farms and peri-urban plots determined to reclaim their stake by way of regenerative agriculture. One half of the two-woman team behind The Right to Roam, she has made community-based environmental activism the focus of her documentary making, raising awareness around Colombia's Varadero Reef and ocean plastics in Bali. But it was only when planting seedlings in spring 2020, that she had something of an epiphany. "There's so much to fight for here on home turf," she says. "Looking at this farming movement through the lens of climate change gives me hope because solutions are being developed in these projects."

Several kilometres east along the Jurassic Coast, Tamarisk Farm has braced the seawinds for centuries. Its fields quilt the landscape, a haven for native flora and fauna - adder's-tongue fern, the sleepy dormouse - that is declining elsewhere in south-west England. Cereals intertwine with cover crop: chicory blooms alongside palomino-coloured wheat. The plants work in tandem to fix nitrogen; some cycling and others storing carbon. "Grasses benefit and the wheat benefits," explains farmer Ellen Simon. "After, this will all be grazed." In turn, Ruby Red Devon cows fertilise the land. An agroecological farming system is a carefully balanced one: animals and crops support one another. Everything has a function. Nothing goes to waste.

It's a similar story at Haye Farm in East Devon, home of Harry Boglione - a salt-of-the-earth character whose Barbour jacket bears telltale muddy elbows - his partner Emily Perry and their two children. Their house backs on to a market garden stuffed with cavolo nero and purple kale. Beyond it rises a hill where plucky hens are neighboured by rare Gloucester Old Spot pigs. Like Ellen, Harry plays to the rhythm of the landscape; livestock grazes among trees, taking shade beneath their branches, trimming back shoots and creating fertile, squelchy muck. This happy coexistence "will last for hundreds of thousands of years," Emily chimes.

For many regenerative farmers, it's not just about reducing carbon emissions but designing a system that redresses power structures and social injustice embedded in current agricultural practices. A system that can withstand economic or environmental stress, and will provide long after they've left. Seed-saving is one way to safeguard the future. At harvest, the finest plant is left to run to seed, dispersing its climatic wisdom. When planted, its tendrils unfurl with confidence, hardier with each passing year.

"People don't understand you can grow tropical crops in the UK," says Paulette Henry of Black Rootz Collective, a project that grows produce relatively new to British shores. The group took over a disused council greenhouse in Wolves Lane, Haringey, in 2019. Scalloped-edged leaves of Jamaican thyme grow alongside pear-shaped gourds. "Elders who moved here from the West Indies grew what they recognised, and it has since acclimatised," she says. "Now, chocho grows well."

Just as seeds are inscribed with knowledge, multi-gen initiatives such as Black Rootz pass down horticulture to the young and interested. Helping the community grow, together, is key. "Children need to know where food comes from, the science behind it, and about self- sustainability," says Lead Grower Sandra Salazar D'eca.

Indeed, the pandemic has exposed the fragility of the food system. The "just-in-time" supply line cracked. Farmers were left with soured, unsold produce; supermarket shelves were stripped; more families than before became reliant on food banks. Now more than ever we need a community-driven, localised food system in which resources can be directed where they are needed most.

It's this kind of system which is cropping up with the help of social enterprise Growing Communities. Pass through Dagenham East station and you may spot a bespectacled Alice Holden among freshly harvested lettuces and deep-emerald cucumbers. Her gentle persona is at odds with the breakneck speed at which she zips around the greenhouse, stripping a plant of dwarf beans mid-conversation. Alice supplies Growing Communities' veg-box scheme which gathers produce from small, sustainable farmers within 100km of London to guarantee fewer food miles. "I also get a guaranteed market," she says. "Each week, they take anything I have."

Growing Communities not only ensures fair payment for farmers, but is working towards providing affordable organic produce. It's Food Credit Scheme ensures quality vegetables go to low-income families nearby. Inclusivity is the cornerstone of Alice's farming practice - likewise Black Rootz and other members of the LWA. They are not only feeding at fair prices, but shifting the public perspective. To eat nutritious food is a human right.

Joya hopes her photographs will encourage people to be more proactive in cultivating or supporting a more sustainable food system. "Maybe they'll set up a small garden or visit an organic food market," she imagines. It's in these choices we find a point of connection with those who feed us, an appreciation of the toil growing takes and an understanding of the rhythm of the natural world as we bite into the seasons. "We eat every day," Joya adds. "And in that small ritual, if we engage with what's on our plates - in the story of food and its production - we can find sustainable solutions to big problems."