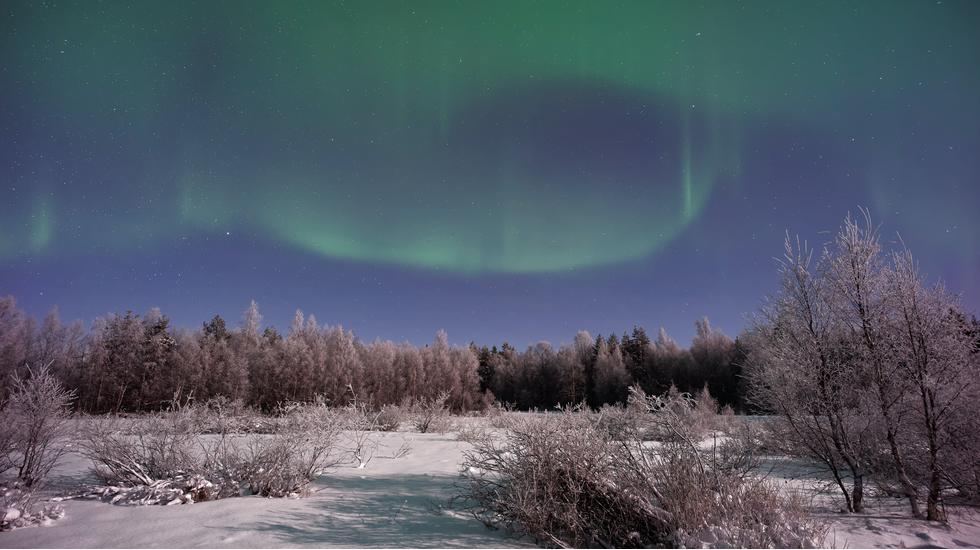 January January 2021. Things had been spectral lately. Like most, I'd barely left home for great swathes of time, had entered some dark-thinking caves.

I live in Copenhagen. But neighbouring Sweden was still letting people move around. There was a chance for me to mission up north. I wanted to see how dark things were where the lights came out. I wanted a reason to dress again.

The porter on the night train checking me in asked what I was going to be doing in Abisko, a tiny town just 200kminside the Arctic Circle. I said I wasn't sure. In a hot little cabin, I took a cold shower and unpacked the things I would need for the next 17 hours: my red pillowcase, essential oils, the book Flights, by Olga Tokarczuk, and a bottle of aquavit for my nerves.

In 18th-century Georgian England, rich homeowners would pay people to grow their hair long, dress like druids and stand all day in their gardens as ornaments. They slept in caves or shacks among the foliage. The gnome was said to symbolise stillness and introspection.

My days in the north would be spent listening to and analysing music; my nights, the sounds and sights of aurora-season Lapland. I knew Sweden was keeping relatively calm during the pandemic, yet I felt something like the guilty feeling I had when I stepped on a friend's flip flop as I walked too close. Would the people I met feel exposed, infringed upon? I resolved to keep my distance and stay in my cabin till the morning, rustle up a plan. But I was far from lonely.

The ornamental gnomes, they lived and breathed through the moving night. Like gnarled old men in wedding gowns. They were miniscule, pointy but not like pines, these queer little aspen. It delighted me to find out that they are distinctive in the tree world, being either male or female, but, that night, they seemed very much other. On and on and on, they appeared, these gorgeous things, as I sat tipsy, my lights turned off, elbows propped on the red pillow that wouldn't see any sleep.

At dawn, wandering to the restaurant cart for a cup of tea, I laughed, remembering the crisps and cola carts of British trains. Here, there were fresh green juices and even a chanterelle stew. A boy heated up my shrooms, fresh from nearby Uppsala, as we sped through dainty towns painted in scarlets and golds with steeples like wedding-cake icing. The gnome-like trees continued to wave in their thousands, stout and surly, going nowhere for seven years - the length of time the fake druids were said to have been kept in their garden roles.

By the time I'd dined in preparation for my first night hike at STF, I'd deduced just how much Abisko now looked like Abisko 100 years ago. Everyone was Swedish (save for some resident Argentines, who would, the next evening, break folkloric law). The snug dining room was almost entirely lit by candles, which also lit the sea of faces - families and couples diving into reindeer, salmon, potato - then me, on the edge, relieved to be eating in a restaurant and not on my sofa. I flirted with a waiter. Watched a couple settle into nervous conversation - a date? I noticed another diner's loud verbal tic. It was comforting to hear new sounds.

Once outside with local guide Åsa, any hair exposed immediately froze, but this air was wetter and easier to breathe than that of freezing days in England. Åsa and her family run a tour company offering aurora, bike, snowmobile and mountain-taxi tours, which was flourishing in the short time between its launch and the onset of Covid. 'Without the Americans and Chinese coming up, it's been difficult,' Åsa said as we walked through the national park, my eyes darting around in search of bears, wolverine and lynx. We set up a fire and drank warm lingonberry juice from a flask. Atop the largest mountain is the sky station, offering optimum views on a clear night and reached by exhilarating open chairlift over a ravine.

'We had fewer restrictions but were cut off, without tourism from the rest of the world. We confided in one another, held weekly meetings, strategised,' Åsa explained. Abisko set about positioning itself as a destination for curious Swedes who'd never stepped farther than the Stockholm archipelago - or Thailand.

I was excited that night at the prospect of seeing the northern lights, but the green lady did not appear. I went to my room, undressed, lay down, then, 30 minutes later, when I thought I saw the light changing, dressed back into my many layers again. I repeated this routine over and over, the thought of missing the display unbearable. But winds had been coming in thick from Siberia, easterly and determined, and needed some Atlantic deliverance.

Late the next afternoon, I took a snowmobile ride across the tundra with Åsa. The light, even through goggles, was dazzling, as we swerved at full speed into deeper and deeper snow. I was missing virtual film night with a friend from London. He texted: 'Wolverines are insanely rare. Please try and see one.'

At dinner, I blathered on about Kaurismäki to a Finnish waitress, returning to a line in the Tokarczuk book: 'Real life takes place in movement.' I heard the tic I'd heard on the train again, yet couldn't place its source. It was a nice sound: a loud 'yup.' Had I been hearing things all along? My trip had begun to splinter off in directions only solo travel can. I was going mad.

The second evening was clear; we were in for a show. I wandered towards Lake Torneträsk, one of Sweden's largest, and less light-polluted, away from the inn. Suddenly, green lights whisked overhead, like muted fireworks, but other-planetary. I knew my tears would freeze, but cried anyway, and remembered the stillness and silence that Sami legend says the aurora begs of us. When the Sami arrived 8,000 years ago, a massive ice sheet melted, making conditions for the flora and fauna bearable. They felt certain that the lights, though beautiful, bore omens, and held troubled spirits that had met a violent end. These raging green (oxygen) and red (nitrogen) formations meant unfinished business. 'Show reverence for the northern lights,' said the Sami people then, and now.

Ancient Greenlandic Inuit folklore supposes that the colours are trails from ancestors' skulls. Vikings thought they were Freyja's female army on the way back to Valhalla. Or could it be Thor and Odin fighting the frost giants? The gentle Finns believe they are foxfires, created by magic creatures with fiery tails. Human science, of course, tells us the aurora are plasma, solar wind, fields and filaments, but I chose to go with the Sami and stayed quiet, at the mercy of the aurora. I was seeing into the heavens.

The Argentinians, downshore, whooped in joy. The Sami might have been raging, but it was a thrill to hear those Latin cries of wonder, the expression of travellers seeing a natural wonder for the first time. I prayed the spirits wouldn't come down and take them.

As I walked slowly back to base, a moose was standing in the trees, its eyes glistening in the moonlight. I was too delirious and high from the aurora, still flouncing around, to feel the fear. Only the next day did I uncover the real heft of this mammal, when I saw its footprints in the snow. The bearded man on reception at the hotel told me they could be deadly when they charge. He identified all my footprint photos, and I bought a pen and some postcards.

Forty-eight hours later, as I sat in an Airbnb cabin in the tiny Stockholm-archipelago hamlet of Boo, something sad slid into my news feed. The last of Prince's pair of white doves had passed away, aged 28, at Paisley Park. Her name was Destiny. I cried. My journey to the north was over but after a martini and a sleep in Stockholm, I'd booked this place, afraid of going home.

There was no way out of Boo without a car, apart from a bus sometimes spotted in ghost sightings. The owner checked on me nightly to see I hadn't frozen or starved, his tiny, wide-eyed son holding out an ornate candelabra. I thought about Émile Zola and how, stuck, freezing, inside his Parisian apartment in the dead of winter, with no way of finding food on an author's wage, he resorted to the frozen sparrows that lay dead on his outer windowsill. I'd brought brown rice, oats, oat milk, peas, soy sauce and fake champagne. A monkish diet that allowed me to savour the whirling memories of the week before, the dancing lights propelling my body out into Boo's forests, desperate to see them again, still not sure they were even real. I knew that I would never see them here, and probably not ever again.

Discover More
How to Live Like a Scandi: The Eco-Break Edition
Read now