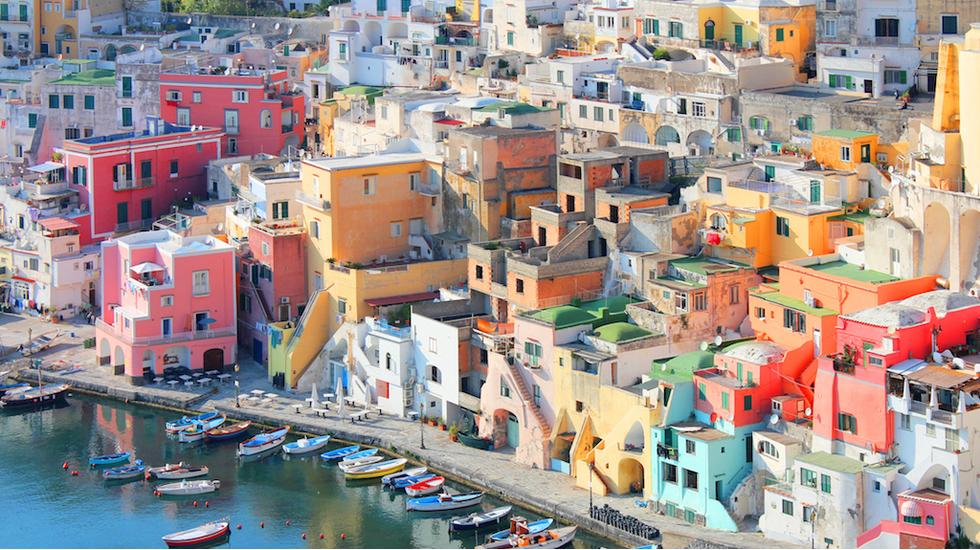 You You may or may not have heard of Procida, a tiny island off the coast of Naples, but you'll almost certainly have seen pictures of it. The 17th-century fishing village Marina Corricella appears on the cover of countless Italy guidebooks, impossibly picturesque with its candy-coloured houses and narrow streets. It's also the backdrop for Anthony Minghella's 1999 adaptation of The Talented Mr Ripley, where Jude Law and Gwyneth Paltrow's stylish escapades reignited a love for all things La Dolce Vita.

The vision of Procida Minghella must have seen when he chose the location for Dickie Greenleaf's charmed existence has hardly changed. Dayboats still come in and out, bringing fresh catch to waterside trattorias, and fishermen still sit on street corners smoking and drinking coffee.

The rest of the island, though less iconic, bites deeper with its rich tapestry of lemon groves and crumbling hamlets, giving way to tastefully designed hotels and gelaterias. Covering just five square kilometres, Procida is easy to explore by foot in a single day. That said, the real magic comes after the boatloads of visitors have returned to the mainland and the sun begins to set over the Bay of Naples.

Beyond the picture-postcard images of this tiny island lies a beating cultural heart; one which has earned Procida the title of Italy's Capital of Culture for 2022. The victory was announced by Italian Minister for Culture Dario Franceschini, who paid tribute to the theme of La Cultura Non Isola - "Culture Doesn't Isolate." The proposal that won Procida the honour, and €1 million from the Italian government, includes 44 creative projects, 240 local artists and 8 renovated cultural spaces over the course of the year. Ahead of the action, we share with you some of the best places to soak up that balmy southern Italian lifestyle.

Offering easy access to the beach through a little blue door, this campsite has low-key luxe down to a tee. Stay in one of the vintage Airstreams, safari tents or more permanent lodges, which will convert even the most dubious of adventurers to the joy of camping. The outdoor showers are located under a canopy of lemon trees, breakfast and aperitivo are served by the pool, and you’ll fall asleep to a choir of crickets. It’s not all wild and bohemian, though: there’s WiFi, powerful AC, and an on-site chef preparing magnificent al fresco dinners each evening. The campsite is well located between the two main ports, making it an excellent base from which to explore the island.

This chic 12-bedroom hotel is set in the heart of Marina Corricella, the fishing village famed for its pastel-hued beauty. The minimalist rooms have views over the sparkling bay, and are uniquely decorated with soft linens and local treasures. A stone’s throw from the hotel, on the approach to the harbour, you’ll find Il Pescatore, a stylish seafood trattoria serving tasty Mediterranean dishes straight from the sea.

Perfectly positioned a little way inland, this stylish spa hotel is the slightly bigger and more cosmopolitan sister of hotel San Michele. The 22 bedrooms are built around a jet-black swimming pool, the air scented by herbs growing in the organic gardens beyond. There’s also an indoor swimming pool, with an open-air gym looking onto the grounds below. In the avant-garde restaurant Bouganville, classic Italian dishes are reimagined by talented chef Gianluca Costagliola.

Channelling vibes of a crumbling Moroccan riad, this rustic bed and breakfast is perched inland, offering views over the sea through cacti and palm trees. Start each day with a delightful Italian breakfast – think fresh figs, watermelon and excellent coffee – served on the peaceful terrace. Well-placed in the centre of the island, it makes a great starting point from which to explore on foot or by e-bike – available locally to hire.

This collection of eight bedrooms and apartments takes its name from the ancient word for the moneyless bartering that would take place between fishermen and farmers in Procida – the primary means of trade here until the 20thcentury. The rooms take inspiration from the island’s history, with antique fishing gear and local objets d’art catching the eye at every turn. Located a little way inland, Cala Cala is a short walk from the northern beaches of Pozzo Vecchio and Spiaggia della Silurenza.