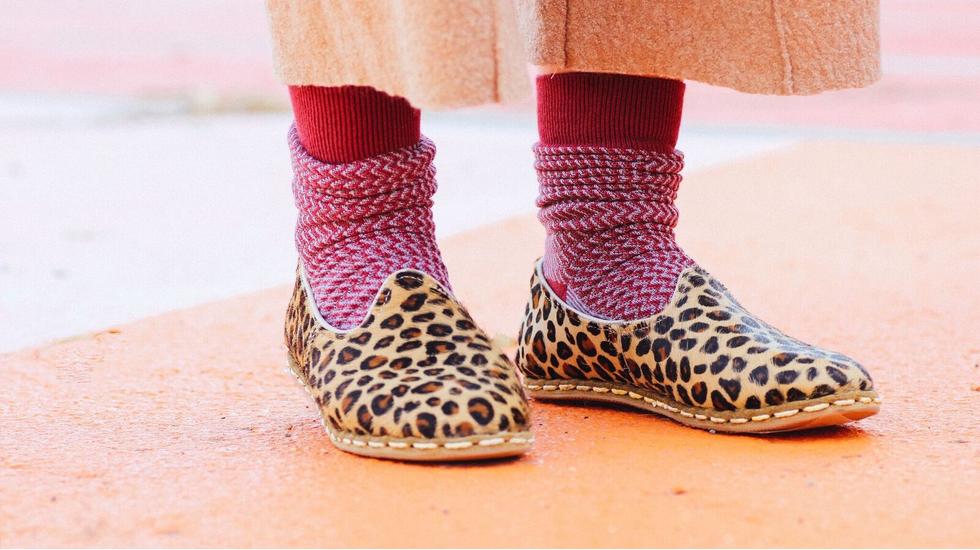 Tucked Tucked away down a quiet side-street in East Village stands the inconspicuous SabahHouse, an airy townhouse and showroom which overflows with trendy New Yorkers and attractive internationals on Sunday afternoons. Though largely there to socialise, drink rosé and enjoy the achingly cool tunes, guests of 'Sabah Sundays' have another item on their agenda: to pick up a pair of must-have shoes for the well-heeled traveller.

Though their popularity has risen quietly and gradually, the brightly coloured leather slip-ons - known as 'Sabahs' - can be spotted just about everywhere from Cartagena to Cuba, Brooklyn and Belize. Designed with style and comfort in mind, they'll take you from beach to Moroccan marketplace through to brunch in Manhattan.

The mastermind behind the brand is Mickey Ashmore (aka 'The Sabah Dealer'), a Texas-born Wharton graduate who diverted from a career in finance when he realised that his part-time project of commissioning custom leather shoes from Turkish craftsmen was gaining far too much traction to ignore. In an age of anonymous online shopping and cheap, throwaway couture, Mickey has carved out a lifestyle brand that harks back to the art of craftsmanship and the traditional intimacy between buyer and seller. Though the brand is growing fast, Mickey still prioritises face-to-face interaction and hospitality for his customers, with the majority of his clients stopping by Sabah House 'IRL' to purchase a pair and linger for a chat over a glass of wine.

While Sabahs are already a hit with jet-set New Yorkers, Mickey has been taking the brand across the US, with Sabah House pop-ups in cities from Dallas to Detroit. It's because of this that Sabah wearers quite literally come from all walks of life, with "hipsters and bankers, farmers from Arkansas and surfers from LA" all sporting them.

A brand which celebrates travel, discovery, style and comfort is one that we can definitely get on board with. So SUITCASE sat down with Mickey to hear more about the stint in Turkey that changed his life, how 'Sabah Sundays' came to be and #WhereToNext.

How did the Sabah brand begin?

Sabah came about after I spent two years living and working in Istanbul. While there, I dated a girl from the southeast of Turkey. Her grandmother gifted me a pair of traditional leather slippers from their hometown, which were unbelievably comfortable. I wore them everyday and wherever I travelled: the beaches of France, nights out dancing in Beirut, hiking in Morocco and work trips to Munich, Ireland and Portugal. I even polished and paired them with a tuxedo to a fancy Turkish wedding aboard the famed Savarona steamship. One of the few non-Turks onboard, and the only one donning traditional Turkish slippers, my footwear was a total hit. Despite the fact that the shoe style had fallen out of favour with the Turks, I, the Texan living in Istanbul, had become its biggest fan.

I moved back to New York still wearing those shoes and decided to seek out the maker to produce a new pair for me. I suggested a few changes to the design and there Sabah was born. Now, almost four year laters, we still produce every pair with those same makers - we've gone from employing five craftsmen to over 20. Every pair is still made traditionally and by hand, the same way. But with more refinement, a better attention to detail and higher quality materials, not to mention a more updated look.

Your approach to retail is unique - a far cry from a typical brick-and-mortar shop. What fuelled this decision? And do you see this changing as the brand grows?

It was fuelled by how I like to shop. I rarely shop online. I mostly shop when I travel and mostly outside of typical shopping situations… markets, bazaars or through friends. Ultimately, our goal is to make a good pair of shoes and provide the best possible service. As we've expanded, we are opening new locations and our staff base is getting larger. Unfortunately, I don't get to meet every customer anymore.

Also, our demand is growing so much that not everyone can visit us personally. For a long time we sold just by phone and email but we've recently launched an online portal to buy Sabahs. We used three years of sales 'understanding' to build an online experience that mimics how we sell and is very user-friendly. It's service and product oriented - transparent and not much else.

Tell us about 'Sabah Sundays' and your East Village showroom.

The Sabah House in East Village is where it all started. It's the soul of our brand and the best way to buy a pair of Sabahs.

Sabah Sundays started as my vehicle to sell the shoes. I had a full-time job so I opened my house up every Sunday to friends for an afternoon party where you could also try and buy Sabahs. That became a regular thing which grew and grew. We'd end every party and go dancing somewhere… Now we host Sabah Sunday probably once a quarter and it's a pretty big party.

The Sabah House is still open every Sunday - it's very festive and social. People are always hanging out there, dropping by to say hi with a bottle of wine. It's a home first and a shop second, so we focus a lot on hospitality and making it a great place to spend a Sunday.

Why does the theme of travel play such an important role in the Sabah brand?

I've travelled a lot, and Sabahs are great for that. I used to travel mostly for personal reasons; now it's mostly to bring Sabah to markets new and old and fit customers. So I've tied together my love of travel with the brand's best interests. It's a great combination!

We've spotted men and women from all walks of life wearing Sabahs. Is there a common thread that runs through your customers? What do you think attracts them to the shoes?

The best part about our brand and product is that they appeal to just about everyone. We have hipsters and bankers, farmers from Arkansas and surfers from LA. We have all ages, of varying socioeconomic levels, all over the world. They're just great shoes to wear in almost any situation. We've outfitted wedding parties and we've outfitted people going sailing. There's even an airline which fits their entire crew in grey Sabahs…. how about that!

Do you have a favourite pair?

I love our camel/black option. It's classic and simple, yet a little different. I'm also a big fan of our baleen blue which is a navy nubuck - it's an awesome leather.

Apart from a pair of Sabahs, what's in your suitcase?

A chore coat and a white shirt from RTH Shop, a good pair of Levi's, that day's New York Times and a Wall Street Journal, a pair of running shoes and gear and a handful of T-shirts. My laptop. I pack it all in our Sabah Traveler bag which we make in Connecticut, and I always pack light.

You're constantly on the go, but where is home?

Right now it's my hometown of Dallas, where we've just opened a store!

I'm taking some time off at the end of the year to go and visit a good friend in Egypt.