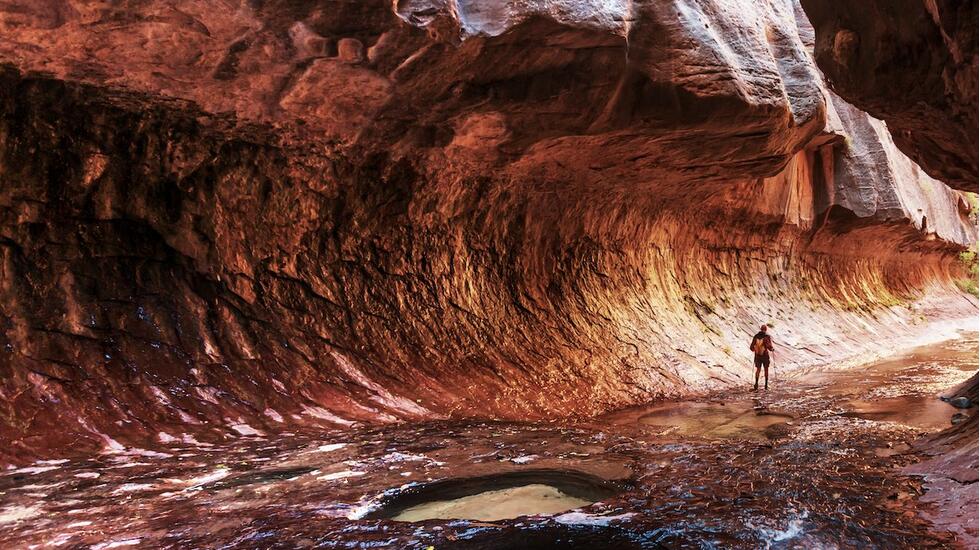 This article is part of a regular column from SUITCASE's Julie Alpine celebrating the joy of travel.

What What would my memories of the newly opened Disneyland Paris be without the frisson of fear I felt on being stuck on the It's a Small World After All ride when it came to a juddering halt mid-way round, leaving me and the boy I was with (the only one my dad ever thought I should marry) stranded in the dark, surrounded by small, ghostly animatronic figures, the rictus grins on their little faces, frozen? (If we can't trust in Disney not to suffer glitches, what in God's name can we trust in?). In truth, the greater terror on that trip was over the loss of my (much vaunted by teen magazines at the time) "feminine mystique" when we both succumbed to gastroenteritis later that week, ensconced in a tiny room in the Montmartre neighbourhood, with matchbox-sized bathroom, cardboard-thin door.

Travel is, by its very nature, scary. Leaving our comfort zone, emotional support animals and daily routines behind, we set off into the great unknown hoping for the best, checking and re-checking that we have our passport, visas, phone chargers, wits about us. As a kid, everything scared me - boats, lifts, flesh-eating parasites - but, in the kind of aversion therapy big at the time, and in the wake of Susan Jeffers' 1983-published bestseller Feel the Fear and Do It Anyway, I forged ahead, operating on the policy that what doesn't kill us makes us stronger. And it worked. Because, while it might seem counterintuitive to leave the relative safety of home, the horizon-broadening, character-building effects of immersion in other cultures, making eye-opening discoveries, challenging ourselves to cope in sometimes hostile environments (what, no WiFi?) are the epitome of liberating.

Horror film tropes are horror film tropes for a reason. When I asked around about what things had terrified friends on their adventures, what I heard, time and again, was the stuff of the films we'd grown up watching from behind splayed fingers. Primal fears, come to life. And triumphed over.

Challenging ourselves to cope in sometimes hostile environments is liberating

"I was sailing from Cuba to Mexico," recounts travel writer and SUITCASE contributor Imogen Lepere. "A huge gust of wind came out of nowhere and, because we had our mainsail up, we very nearly capsized in the deep ocean - extra-scary as a shark had taken a fish off our line minutes before. But the crew worked together to get the sail in and then it was pretty exhilarating; we had the wind and waves behind us and we were flying along through the night."

"I was in Athens, near the Acropolis, watching these young, cute-looking dogs playing," remembers publisher Harry Rekas, "when one of them started to growl. Then they all did. I ran for my life, but two of them managed to grab hold of my coat. I was able to fend them off, but it wasn't just the fear of injury... There were people everywhere, going about their business, watching this guy being chased by a pack of 20 dogs. It was the embarrassment that almost killed me."

"I was speaking to the guy sitting next to me on a flight from LA to London, just following take-off," shudders actress Mhairi Steenbock. "The war in Iraq had just started and he was a bodyguard, en route to Baghdad. At one point, the conversation tapered off, then he looked up and asked me if I knew how to parachute. I thought, 'why are you asking me that?' I was anxious for the whole rest of the flight."

Jaws. Cujo. A thousand air disaster movies... As for the axe murderers (and the rest) out there... well, if I collated even half of my stories and those shared with me by any woman who has ever travelled alone on the subject of creepy men, I'd have a book on my hands.

Having survived the 9 October 1996 earthquake in Cyprus, the largest seismic event in the eastern Mediterranean region since 1953, I was in my apartment in Chlorakas village that night, alone, when I was woken by an eerie rumble, my bed shaking. An aftershock. A picture fell off the wall downstairs, glass smashed. I jumped to my feet thinking "door frame", "strong table", but, as I watched a splintering crack appear along the stuccoed wall of my terrace, a fruit bowl jump off the counter, apples rolling everywhere, it wasn't shelter I headed for but the telephone. And, while there wasn't much my parents could do to help me in the middle of the night from Scotland, 5,071km away, I was grateful for their company until the building stopped swaying.

Even my cousin who, when working in a remote region of a West African country, actually experienced flesh-eating parasites (vanquished one terrible, long night with the aid of a sterilised knife and a bottle of whisky) is still around to tell the tale. Life is for living, and we don't have forever, so let's set aside our jitters over foreign prisons, mechanical faults on rollercoasters, not having packed the right footwear for an impromptu trek in the Atlas Mountains, and go. Because the only thing you're going to regret are the things you didn't do. That boy I went to Paris with, say? I fear my dad was right.

Discover More
Exit Through the Gift Shop: Why We're a Sucker for a Good Souvenir
Read now